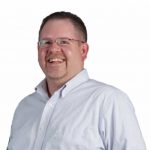 Moody’s story with WB Engineers may not have started in a garage — but it was close. The second employee in the firm’s Boston office, Moody joined WB as an engineer and has been with the company for 15 years. During the first six months of his tenure, his office was a seat at founding principal Peter Dussault’s dining room table.

His first projects were for Verizon, a firm with high expectations for its engineering consultants. He was so diligent about delivering projects on deadline and meeting Verizon’s business goals that, from the early days that the company was in business and ever since, Verizon has been one of WB’s loyal clients. Moody has managed over 350 projects for Verizon.

“It is a great part in WB’s story to be able to name Dan Moody a principal of the firm,” says Bonifacic.

Dussault adds, “Dan says what he is going to do and gets it done. When LEED accreditation first started to become something that was talked about in this industry. . . . he was one of the first to earn this credential.”

In his new leadership role, Moody will balance his new responsibilities with what he does best — managing project teams to solve engineering problems.

He also has taken on the additional responsibilities of mentoring staff and firm management.