Preserved by the National Park Service as a historically important downtown gateway, the 20,000sf renewed structure is now part of the city’s revitalized urban core. 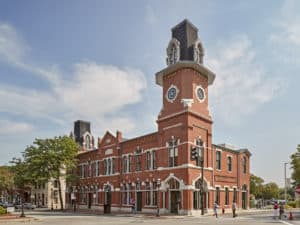 On the second floor, the recital hall and dance studio take advantage of the center’s high roof. Along the sidewalk, a linear gallery and theater lobby display student activity and invite the public in through a main entry at the base of the building’s landmark clock tower. 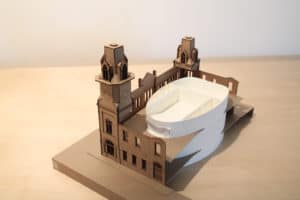 Model of Theatre/photo by Robert Benson

Exterior expansion of the depot to accommodate the center’s growing departments was constrained by an existing historic district building that fills the site. Instead, the building’s interior space was nearly doubled through excavation and construction of a new basement and a new rear addition housing the mechanical support spaces. 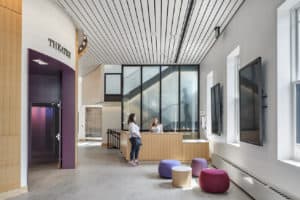 The theater’s unique form solves multiple design challenges: structure to support the facade, functional to maximize theater seating while allowing for adequate lobby circulation, and metaphorical to represent the arts resurgence in this once thriving city.