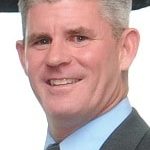 Monahan serves on the Boston Redevelopment Authority as a mayoral appointee.

“As a fourth-generation IBEW member, it is a tremendous honor to serve my union in this heightened role. My title is changing, but my devotion to union families will not,” said Monahan.