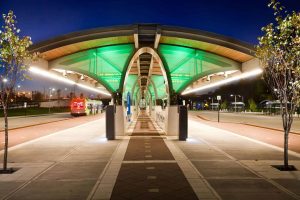 Boston – The American Council of Engineering Companies of Massachusetts (ACEC/MA) has named Michael Baker International, Inc. as a winner of its 2016 Bronze Engineering Excellence Award for work on the CTfastrak in Central Connecticut.

Michael Baker International, with world headquarters in Pittsburgh, Pennsylvania, was retained by the Connecticut Department of Transportation to serve as program manager for the CTfastrak, the state of Connecticut’s first bus rapid transit system.

The system offers the speed of a rail system with the flexibility of bus service.