Manchester, NH – Metro Walls was recently recognized at the Associated Builders and Contractors New Hampshire/Vermont Chapter’s (ABC NH/VT) Excellence in Construction Awards with two Excellence Awards. The awards reception was held on Nov. 3 at the DoubleTree in Manchester. 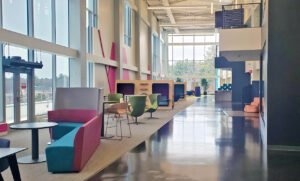 Metro Walls received the Excellence Award in the Commercial $2 – $5 million category for its role in the completion of EMD Serono’s Horizon Building in Billerica, Mass. The team’s exceptional craftsmanship working to frame and hang elaborate finishes throughout the space, along with their extensive coordination with the project team to overcome challenges due to the pandemic, manpower, and supply disruptions, played an enormous role in the success of this project, according to representatives of Metro Walls. In addition, the firm’s ACT division completed a large scope of work for the project, including ceiling clouds, acoustical wall panels, and Tectum Finale ceiling panels which were installed in the 32-foot-tall concourse space. The 149,000sf, four-story biopharmaceutical research and development facility, which also received LEED Gold and WELL Platinum certifications, is comprised of flexible wet lab space, collaborative open office space, conference rooms, and concourses with a cafe. 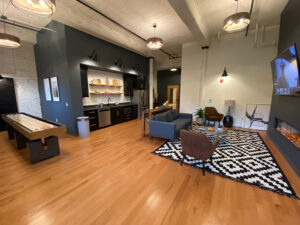 In that same category, Metro Walls was also awarded an Excellence Award for its role in the Lincoln Lofts project, located in Biddeford, Maine. Metro Walls representatives say the firm’s ability to safely complete the labor-intensive scope of work in this 1850s mill brick building, while collaborating and coordinating with the other trades, required patience and the ability to constantly adapt to challenges that arose due to the age of the building. The 5-story, 305,000sf mill building includes 180,000sf of 148 luxury loft rentals, a state-of-the-art fitness facility, a rooftop terrace, and a restaurant, which will contribute to the future growth and expansion of Biddeford’s local community and economy.

“We are excited to be recognized for our work on these two unique projects with Excellence Awards from ABC NH/VT,” said Bryan Hussey, president of Metro Walls. “We are extremely proud of this accomplishment and humbled to be recipients of this distinguished award alongside many of our industry peers. Congratulations to all the winners of this year’s 2022 Excellence in Construction Awards.”

The Excellence in Construction Awards (EIC) honors contractors for their complex, innovative, and high-quality construction projects measured by criteria including safety, complexity, attractiveness, challenges overcome, cost, and completion time. The EIC awards recognize all members of the construction team, and the winning projects were selected by a panel of judges made up of industry experts.