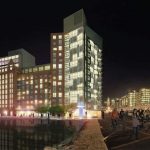 The NECA member is working in tandem with general contractor Shawmut Design and Construction of Boston as well as architects, The Architectural Team, Chelsea, and Jennifer Carpenter Architect of New York, NY, Boston; and EE, RDK Engineers, Boston to address logistical challenges presented by the building’s open ceiling layout.

MEC commenced work on the project in mid-September 2014 and is on track to meet the aggressive project schedule, as Converse will take occupancy in spring 2015.

The new Converse headquarters in the North Station area and in close proximity to TD Garden and the Zakim Bridge, will house more than 400 Converse employees when it opens in April 2015.  The Converse headquarters building is a key component of Lovejoy Wharf’s historic adaptive reuse project that will transform the gateway between Charlestown, Boston’s North End and West End.

Converse is a Fortune 500 footwear manufacturer and a wholly owned subsidiary of NIKE, Inc.