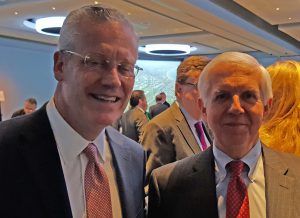 The HYM Investment Group recently announced that it completed the purchase of Suffolk Downs, a 161-acre property in both East Boston and Revere. O’Brien shared plans for the site located next to the Suffolk Downs and Beachmont MBTA Blue Line stations, two stops from Logan Airport and 10 minutes from downtown Boston. The racetrack will close this year. HYM plans to transform the land into a highly resilient, transit-oriented, mixed-use development with commercial office, retail, housing, and open space.

The initial project phase will include two office buildings (each 260,000sf, or 520,000sf total), with supporting corporate uses on the ground floors. 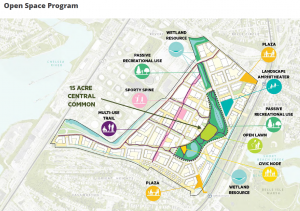 A question was asked by an MBC member regarding the January flooding in Boston and how it might affect the plans. O’Brien addressed the question with HYM’s forward-thinking principles to effectively manage for climate change and sea-level rise. The plans call for raising the ground level for buildings and at the same time providing a large centrally located open space that could also serve to quickly accommodate excess water for drainage if necessary.