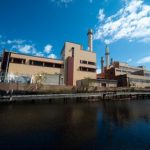 “Green Steam” is an innovative environmental solution that captures and reuses heat that was previously lost to the environment. The increased efficiency reduces greenhouse gas emissions by 475,000 tons annually, the equivalent of removing 80,000 cars annually from the road and is directly responsible for nearly 6% reduction of non-transportation carbon emissions for both cities. Additionally, “Green Steam” infrastructure improvements support sustainable development in Boston and Cambridge by increasing the LEED ratings of buildings that tie into the system.

Some of the benefits of Veolia’s new steam pipeline connection and planned reconfiguration of Kendall Station: