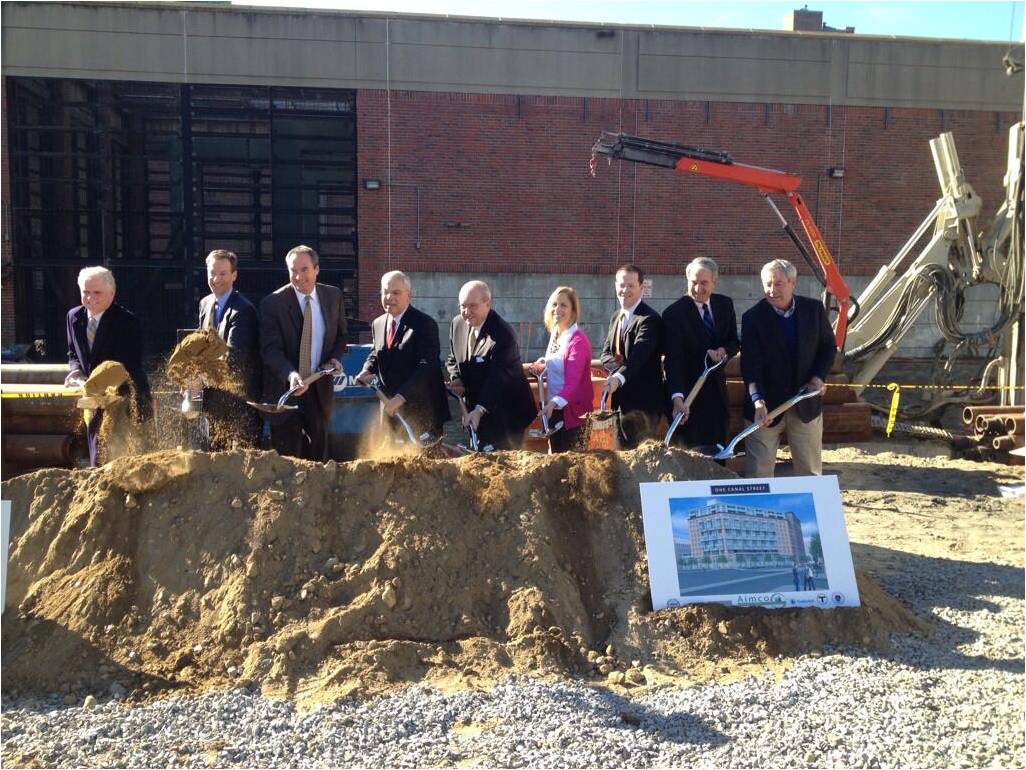 Boston – Mayor Thomas M. Menino joined Massachusetts Secretary of Transportation Rich Davey and representatives of the Bulfinch and West End neighborhoods, Trinity Financial, Aimco, and Prudential Mortgage Investments to celebrate groundbreaking on the One Canal development in Bulfinch Triangle. The $190 million project will be 12-stories and have 310 units of housing, including 21 onsite affordable units, 21,000sf of ground floor retail designed to accommodate a neighborhood supermarket, and 147 parking spots. The project is close to the North Station & Haymarket MBTA stops, ideal for transit oriented living.

“Thanks to investments like the One Canal project, Bulfinch Triangle has grown into a truly vibrant neighborhood,” Mayor Thomas M. Menino said. “Signs of the transformation are clearly visible as new residents, businesses, and employees are already moving in.”

ne Canal Street will offer a combination of one-, two-, and three-bedroom apartment homes with modern finishes such as granite kitchen countertops, stainless steel appliances and in-unit laundry. The apartment community will include a state-of-the-art fitness center and clubroom, pet friendly amenities, a rooftop swimming pool, and multiple outdoor spaces. There will be a 147-space parking garage on the second and third floors, and the ground-level retail space is designed to accommodate a neighborhood supermarket.

Aimco is the owner and operator for the project, that will be constructed by the experienced development team at Trinity Financial. Aimco will invest $76 million of equity in the project, raised through the sale of lower-rated properties in Massachusetts, Indiana, Colorado, and Texas. Prudential Mortgage Capital has provided a 10-year, $114 million loan to Aimco to help finance the development. The site has been leased to Aimco pursuant to a 99-year ground lease from the Massachusetts Department of Transportation. ICON architecture is the project architect. 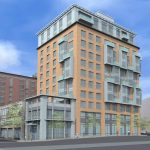 “We are excited by the opportunity to invest in the City of Boston and to be part of the renewal of this great neighborhood, and thank our many public and private partners for their commitment to this project,” said John Bezzant, Aimco Chief Investment Officer.

Four developable parcels of land were created in Bulfinch Triangle as a result of the Central Artery/Tunnel Project. One Canal will occupy parcel 2ABC. The Avenir and The Victor have already been built on two of the parcels, adding 526 units of housing to the neighborhood.

The Bulfinch Triangle is seeing a swell of investor interest and is a model for mixed use, transit oriented, vibrant urban development. More than 1,400 units of housing are under review or approved in the area and Converse will move its headquarters to Lovejoy Wharf  in 2015.

“We know that transportation investment benefits our economy and helps create opportunity,” said Richard A. Davey, MassDOT Secretary and CEO. “Part of that investment is working with the community and developers to partner on projects like One Canal that will provide new housing and jobopportunities for the residents of this region. We look forward to the opening of this exciting development.”
Bezzant  noted that “One Canal, with its proximity to health care, government, and financial district employment centers, adjoining mass transit options at North Station, and the walkable dining and recreation opportunities of the North End and TD Garden, will be a terrific addition to Boston’s residential scene. It will take its place as a jewel in the crown of the City of Boston’s revitalization of the Bulfinch Triangle and the northern anchor of the transformative Rose Kennedy Greenway project.”