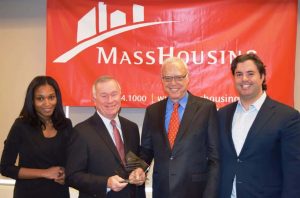 Boston – For the 15th consecutive year, WinnResidential, the property management arm of WinnCompanies, has been recognized as the leader in partnering with minority and women-owned businesses by MassHousing, the independent agency responsible for providing financing for affordable housing in Massachusetts.

In a Nov. 11 announcement, MassHousing said WinnResidential led all property management companies in M/WBE expenditures for maintenance and goods and services during the fiscal year that ended June 30 at properties financed by MassHousing.

During fiscal 2015, WinnResidential awarded nearly $3.52 million in work to minority-owned businesses (MBE), nearly $2.19 million to women-owned businesses (WBE), and $2.37 million to enterprises that were both minority and women owned. The total of $8 million represents 27.5 percent of the $29.3 million the company spent on vendors at properties funded, in part, by MassHousing in fiscal 2015.

MassHousing Executive Director Thomas Gleason said: “We acknowledge the unique leadership of the WinnCompanies founder and principal, Arthur Winn, and its CEO, Gilbert Winn, for being the only company to have earned the highest achievement ranking every year since this award’s inception in 1999.”

“We appreciate being recognized by the state and our longtime partner, MassHousing,” said Arthur Winn, founder and principal of WinnCompanies. “We always try to do the best we can. I’d like to think being the industry leader for Minority and Women-Owned Businesses is a byproduct of our culture and values.”

MassHousing tracks the annual expenditures under its Minority and Women-Owned Business vendor program in an effort to encourage equal opportunities for those businesses to benefit from work generated within apartment communities the agency has financed. WinnResidential managed 47 MassHousing-financed properties totaling 7,098 units in fiscal 2015.

“In the past 15 years, we have injected more than $140 million into the state’s economy through our strong relationships with minority and women-owned businesses here,” said Gilbert Winn, CEO of WinnCompanies. “They don’t just share in our success; they are key contributors to it. We value these partnerships with our company and the residents we serve.”