Marshfield, MA – Throughout the year, the Marshfield Harbormaster stays very busy monitoring activity on Marshfield’s coastline, which spans five miles down Massachusetts’s southeast coast.  In fact, it is the third busiest harbor in Massachusetts.  In an effort to improve public safety and decrease the occurrences of unlawful and unsafe events, the Marshfield Police Department has deployed video surveillance solutions provided by LAN-TEL Communications, Inc. (LAN-TEL) all along the coast and in the harbor.

The Marshfield Harbormaster began using security cameras in the area approximately five years ago.  They had minimal coverage and only a few cameras at their disposal.  The limited surveillance paired with poor installation, damaged cameras, and unreliable service repairs led them to team up with LAN-TEL Communications three years later in an attempt to boost their security measures.  Marshfield’s Harbormaster, Mike DiMeo, has stated that since the transition, they have significantly increased the number of cameras installed, all of which “have been time-tested and instrumental in their use.  We’ve experienced first-rate service and callbacks for service during off-hours and LAN-TEL Communications’ installations have also proven to be trustworthy and reliable.” 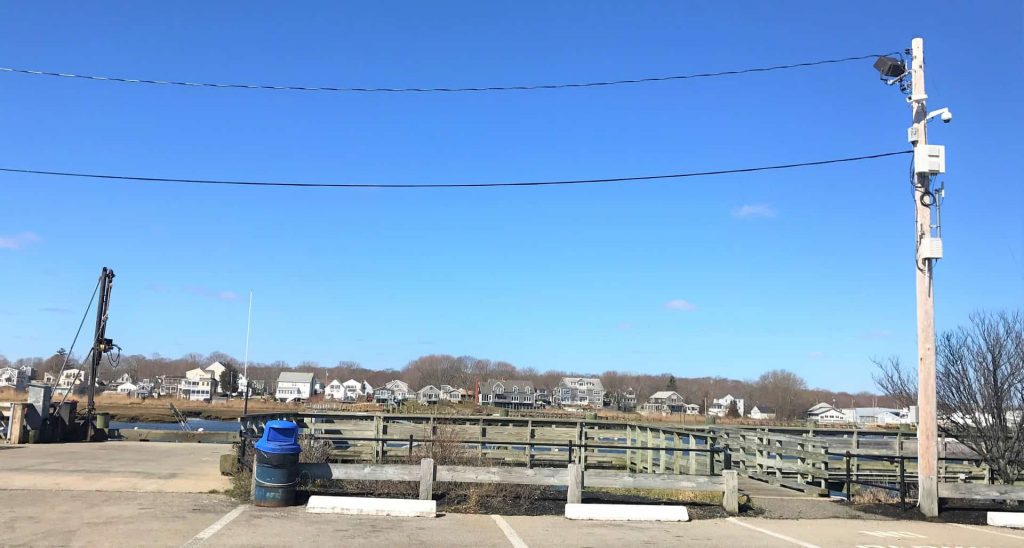 Over the last two years, DiMeo, has had a variety of different cameras installed in various locations to thoroughly monitor the harbor and the surrounding areas.  Each camera has unique benefits that the Harbormaster is able to capitalize on and enables them to increase their maritime domain awareness.  For example, he uses FLIR Systems’ Pan Tilt Zoom (PTZ) camera to continually scan different areas, enabling him to keep eyes on a broad range with fewer but more encompassing devices along the coastline and harbor.  He also takes control of the cameras and moves them to view specific areas and zoom-in with incredible clarity when necessary.  DiMeo also employs stand-alone cameras to maintain awareness in high-traffic or critical zones that need constant supervision, such as the area where boats enter the water or unload the fish.

Additionally, the Harbormaster takes full advantage of the cutting-edge surveillance technology that is seamlessly paired with the cameras.  The surveillance system functions on wireless technology, which allows DiMeo to view the camera activity around the clock and remotely from any location.  This provides the opportunity for him to continually be proactive if an incident were to occur.  Moreover, he can control the camera feed and review past recordings with simple clicks of the mouse, which is a time saving resource in the event of an emergency.

The Marshfield Harbormaster not only supervises activity on the water, but also keeps a close watch on what’s occurring right at the docks.

Fishermen and other visitors are regularly arriving and leaving from the docks creating the need to closely monitor those comings and goings.  By pairing PTZ cameras with standalones, DiMeo can keep a close watch on who is entering and departing the harbor, and if there is any illegal activity taking place, such as unloading prohibited products or fish theft.  One specifically noteworthy use for the surveillance technology is to monitor the times of day when the fishermen leave the dock and come back because harbor activity is only permissible during certain hours of the day.  If a fisherman doesn’t arrive on time, DiMeo is able to use the surveillance technology to track down exactly when the fishermen left the dock and then zoom-in on the image to get specific details, such as what they were wearing or unique aspects of the boat which can assist the Marshfield police in solving the problem or locating any missing persons.

It’s also vital to make sure noone is tampering with the equipment on the docks.  If the rope and pulley that unloads the fish from the boats are cut or damaged, the individuals unloading the fish can be in significant danger if the equipment were to collapse or malfunction.  By monitoring those areas, the Harbormaster can catch suspects tampering with the property as well as prevent dangerous incidents before they happen.

Additionally, standalone cameras have been installed to monitor docked boats to ensure harbor patrons that their property and belongings are safe.  Boaters will report damage to their boats, whether it’s from another boater knocking theirs as they enter or leave the dock, or vandalism or theft.  These incidents can lead to tens of thousands of dollars in damages for the owners.  Having visible cameras on the docks not only minimizes the chance of these incidents by deterring the offender, but the high-resolution zoom capabilities provides clear evidence during property crime disputes.

Property damage and theft aren’t the only concerns the Harbormaster has to worry about at the docks.  Unfortunately, accidents, such as falling off the docks, suicides, and drug overdoses are not uncommon on the coastline.  As a result, DiMeo stays on high alert so he can act quickly to prevent some truly terrible outcomes and the surveillance he has in place helps tremendously with this.

FLIR’s camera technology is so advanced that the Marshfield Harbormaster can also help neighboring towns, like Duxbury, keep an eye on their beaches.  The cameras can zoom in so closely with such high resolution, that their video surveillance can monitor activities from miles away.

DiMeo plans on installing more cameras along the coastline and in other parts of the town to increase the safety of Marshfield’s residents.  This will allow him to have better coverage of all of Marshfield’s waterfront locations, whether it’s along the coast or inland by the river or marshland.  He also hopes to integrate infrared cameras and technology into his already-impressive suite of security solutions to further expand his safety net.  This technology will provide enhanced exposure of activity on the water, especially during low-light hours.  What’s more, DiMeo plans on installing cameras on the Harbormaster’s boats for better reporting of an at-sea crisis.  This will enable law enforcement in Marshfield to see what’s happening during boat rescues and thus allow them to be better prepared for when they return or be more proactive if more assistance in needed.

The state-of-the-art technology not only keeps Marshfield safe, but also serves as a great training tool.  It allows DiMeo to provide real-world examples of what incidents can occur under their supervision, how to track them, and how to react, and prevent them from reoccurring.  Furthermore, the Harbormaster has future plans of syncing the surveillance technology with Marshfield Police’s security monitoring system, which will enable law enforcement officers to share information and see all the activity in real-time as well as serving as yet another step towards being as proactive as possible during any incident, whether on water or on land.