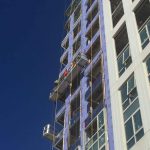 Steel bracing was installed above the cornerstones being removed.

“It was amazing to be part of such a historic event,” said Kevin Wynn, general foreman for Isaac Blair & Co., only days after he had the opportunity to hold in his hands a time capsule that Sam Adams, esquire, governor of the commonwealth, had laid on the ground beneath the cornerstone of the Massachusetts State House 220 years ago. The time capsule had been unearthed once before, in 1855, during emergency repairs to the building’s foundation, and its contents were cleaned, catalogued, and added to before being placed in a carved depression within the cornerstone. The latest opening of the capsule, orchestrated by Museum of Fine Arts conservator Pam Hatchfield, revealed five neatly folded newspapers, a collection of 23 coins (some dating back to 1652), a medal depicting George Washington, a replica of Colonial records, and a silver plate inscribed with the signatures of Paul Revere and founding father Sam Adams that commemorated the erection of the new state house in 1795. 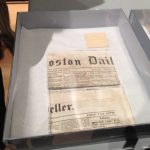 The invitation to take part in the unveiling of the time capsule’s contents came as a surprise to Kevin; Lou Giunta, V.P. and general manager of Isaac Blair; and John Seward, outside superintendent at Daniel Marr & Son, who were part of the team working for general contractor Walsh Brothers to repair a leak in the foundation of the State House. The project entailed the removal of granite stones in the corner of the building, which required fabricator Boston Steel to design steel pieces to hold the stones in place that rested above those being removed. DM&S installed a steel bracing system to support the exterior wall above the cornerstones. In order for DM&S to pick up the steel bracing and place it into position, Isaac Blair built a rigging system made up of shoring towers with 20-foot steel beams running across the top. When the work was completed, and in an exciting twist, Walsh Brothers utilized the rigging system beyond its original purpose and used it to remove the granite stones that were believed to be covering the historic capsule. 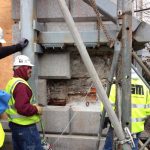 Kevin, who operated the chain fall to pick up the stone and place it on blocking, was recruited by the conservator to assist in recovering the capsule from underneath the cornerstone. Kevin noticed coins fall from the plaster that encased the capsule, and held in his hand a half dime dating back to 1850. After the capsule was entirely removed from the cornerstone, it was brought to the MFA and x-rayed.

On January 6, 2015, the crew from Marr had the honor of attending the event at the MFA, where they watched a simulcast of the opening and later observed the artifacts firsthand along with other attendees, including Secretary of State William Galvin and former Governor Deval Patrick. Lou recalled the excitement he felt upon meeting Paul Revere . . . no, not the ghost, but a sixth generation living descendent who paid tribute to the historical event. For everyone involved, this was surely an experience of a lifetime.