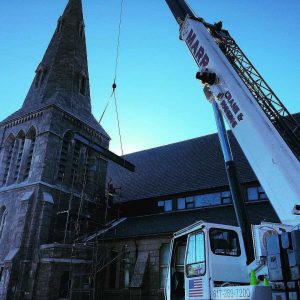 St. Luke’s Episcopal Church was founded in 1834 in East Greenwich, Rhode Island, an area that exercised religious tolerance and was inclusive of the Anglican form of worship that many, following the Revolutionary Way, rebuked for its British influence. Answering the call of East Greenwich residents, Reverend Sylvester Nash led services in a simple wooden structure at the corner of Pierce and Church streets. In 1875, the structure was sold and relocated.

With the surrounding area evolving beyond its agrarian roots into a desirable suburban community with an active Christian population, the church and its accompanying Parish Hall were part of a substantial building expansion to accommodate parishioners and other community members. Thus, the current church was born — with its cornerstone laid in 1875 and a belfry tower added in 1921.

In the fall of 2015, Marr’s Scaffold Division came onto the historic scene under emergency conditions to shore St. Luke’s belfry tower, which had been the unfortunate target of two recent lightning strikes. The town closed down the church along with two adjacent streets, as well as the library across the street. In order to reopen the area as quickly as possible to the community, the church membership contracted directly with Marr on account of its ability to perform multiple tasks to streamline the process and save valuable time.

For instance, Marr was able to provide engineer stamp service that designed the complicated needle beam shoring application, customized specifically to support the massive structure that consists of heavy granite stones, slate shingled steeple, and over a dozen tolling bells. The availability of such combined services provided by Marr Scaffolding Company, Isaac Blair & Co. and Marr Crane & Rigging made for a productive partnership between the church and the Marr team, and with GC The Damon Company, Newport, R.I., responsible for overseeing the project’s masonry work, weather/waterproofing, and beam replacement.

Following the damage to the church’s belfry tower, an engineer’s inspection called for the replacement of two deteriorated concrete-encased beams that supported the interior wall of the tower. To accomplish this, Marr subcontracted the shoring work to its sister company Isaac Blair to design the shoring that would set the project in motion. In succession, Marr installed multiple systems scaffold work platforms for the needed exterior elevated access to the belfry tower. A sectional stair tower was erected for access to the systems scaffold located on the slate roof, and a systems scaffold shoring tower was installed in the belfry in order to land and roll needle beams, weighing in at 1,340 pounds.

The project materials consisted of the heavy steel needle beams (16-ft. x 67-ft. wide, 20-ft. long) painted with weather-resistant paint; custom S-8 channels; 8-inch x 10-inch and 10-inch x 10-inch custom cut timbers (in order to fit inside the arch of the louver); jacks; and stainless steel threaded rod and epoxy to support the weight of the bells and the steepled tower itself. Additional project equipment included a 60-ton crane from Marr Crane & Rigging and a Lull telehandler from Marr’s Aerial Lift Division.

The shoring at St. Luke’s will remain in place until the deteriorated beams are replaced. Marr will return to the site to dismantle the project later this spring or summer. Meanwhile, services will resume as normal on a daily basis throughout the colder months.