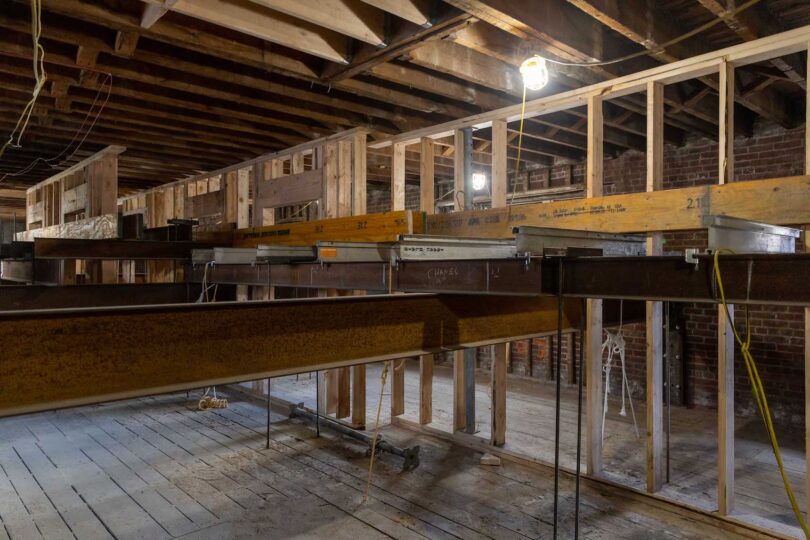 Aluma beams were suspended from needle beams, installed on the first floor, to hold the floor from the top down.

Cambridge, MA – The Marr Companies announced that Isaac Blair is back on campus at Harvard University for the renovation of Randolph Hall (1897), Phase II of the Adams House renovation project.

Adams House, Harvard University’s historic undergraduate residence in Cambridge, is undergoing a multi-year renewal project. The seven residential halls that make up Adams House were built at the turn of the 20th century and have been recognized for their eccentric character and Germanic architectural style. Early in 2020, Marr’s specialty shoring company Isaac Blair provided shoring services during Phase I of the project, which included the renovation of Claverly Hall (1893). 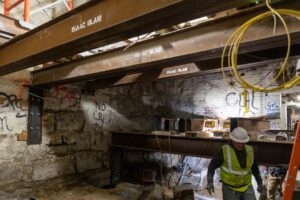 In the fall of 2021, Isaac Blair contracted with Unified Construction Group of Woburn and general contractor Lee Kennedy of Quincy to shore Randolph Hall during the demolition and reconstruction of the residence hall’s interior. Built as one of three “Gold Coast” dormitories, Randolph Hall was a privately owned residence designed to provide wealthy Harvard men an alternative to the antiquated Yard dormitories, with amenities including running water, steam heat, electric light and indoor bathrooms. Thick walls, vertical entryways and “Germanic gloom,” as described by The Harvard Crimson newspaper, were standout characteristics of its architecture.

Isaac Blair has shored various areas of the residence hall to prepare for the construction of a new entrance, multiple elevator pits, the removal of chimneys and more. Beginning this past September, a crew of four installed needle shoring, Aluma beams and tilt-up bracing to support the demolition of floors and load bearing walls in the four-story structure.

In preparation for the construction of the new entrance on Plympton Street, Isaac Blair installed needle shoring to support the exterior wall above two existing large windows slated for removal.

To aid with the construction of the elevator pits, needle beams were brought in to support the adjacent walls for the installation of the shaft. Over the course of two weeks, the crew used chain falls and human strength to feed in three, 25-foot-long, 1,200 pound beams through openings cut into the walls. A shoring tower located on the exterior of the building’s first level was used to support one of the interior needle beams, while an additional tower was built inside to support the two additional needle beams.

Above the fourth floor in the attic space, needle shoring was installed to hold the chimney in place so the full length of the stack could be removed. Finally, to support additional renovation work in the East Wing of the hall, ten tilt-up braces were installed so the ground floor and a load bearing wall could be removed. Aluma beams were suspended from needle beams, installed on the first floor, to hold the floor from the top down.

This project represents one of Isaac Blair’s more complex shoring jobs, with shoring strategically laid out to support not one but five areas of the structure at once. While much of the shoring is now dismantled, Isaac Blair continues to provide various levels of support as the restoration of Randolph Hall proceeds.