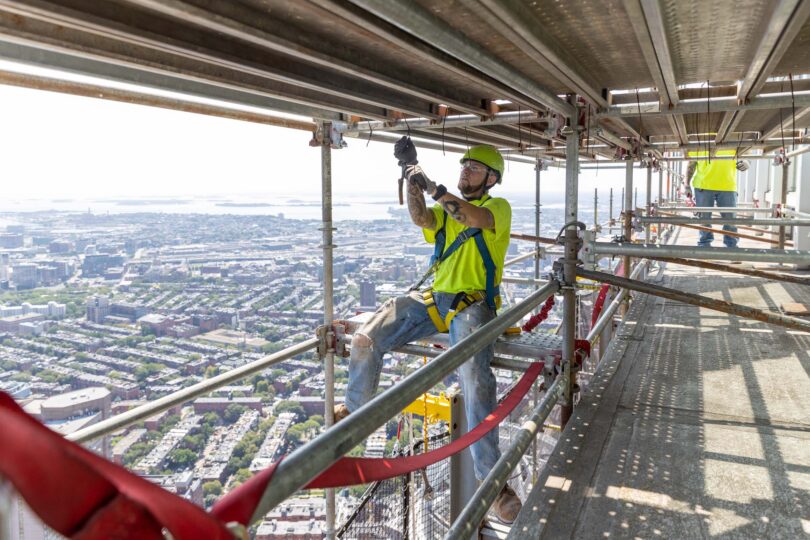 Working at approximately 700 feet above ground level, a Marr scaffolder secured plank to the scaffold to prevent uplift.

Boston – The top three floors of the Prudential Tower in Boston – levels 50, 51 and 52 – are being redeveloped to make way for the new View Boston observation deck.

When the project is completed in 2023, a new, 3-level indoor/outdoor, 360-degree observation deck will open to the public, providing panoramas of the city of Boston and beyond. Boston Properties is owner and manager of the Prudential Tower and is leading development of View Boston.

Marr installed scaffolding along the facade of levels 51 and 52 of the Prudential tower for crews to access and replace the existing signage.

One highly visible component of the renovation project included the replacement of the original Prudential signage hanging on the north and east sides of the tower on the 52nd floor with energy-efficient, LED illuminated letters. In 2021, Marr Scaffolding Company’s (MSC) Scaffold Division contracted with Turner Construction to install a solid, temporary wall along the perimeter of the mechanical room on level 51 for the room’s partial demolition, and to install scaffolding along the facade of levels 51 and 52 for crews to access and replace the existing signage.

Marr installed the temporary wall around the 51st floor’s mechanical room. Constructed of Aluma Beam, Aluma Strongbacks and fire-rated plywood, the wall reached 21 feet high and was designed to keep demolition debris inside and the elements outside during interior renovation work.

Following this, Marr installed scaffolding 50 feet high from the 51st floor on both the east and west sides, rising 750 feet above ground level. Starting with the east side of the tower and later moving on to the west side, an average crew of four scaffolders per day built the staging over two weeks’ time using Systems scaffolding, steel plank and fire-rated debris netting. Scaffold ties were installed every 7 feet out of caution for high wind speeds while planks were secured to prevent uplift; both the scaffolding and temporary walls were built to withstand winds up to 140 mph. Custom-designed steel ties were installed at level 52 to accommodate the existing glass panels. 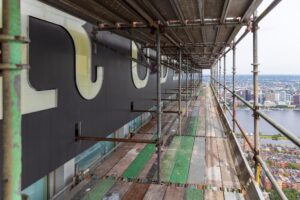 Scaffold ties were installed every 7 feet out of caution for high wind speeds.

Additionally, MSC’s Shoring Division built secure work decks at the penthouse level erecting eight shoring towers for the installation of new cooling towers on the roof. The towers extended 12 feet above roof level and were topped with three layers of cantilevered steel cribbing with a rigging capacity of 2,000 pounds each. These secure work decks were built for Boss Steel to hoist new steel framing above the roof level, which was used by Northeast Mechanical to rig the cooling towers into place.

All materials used by Marr were loaded by hand into the Prudential freight elevators.