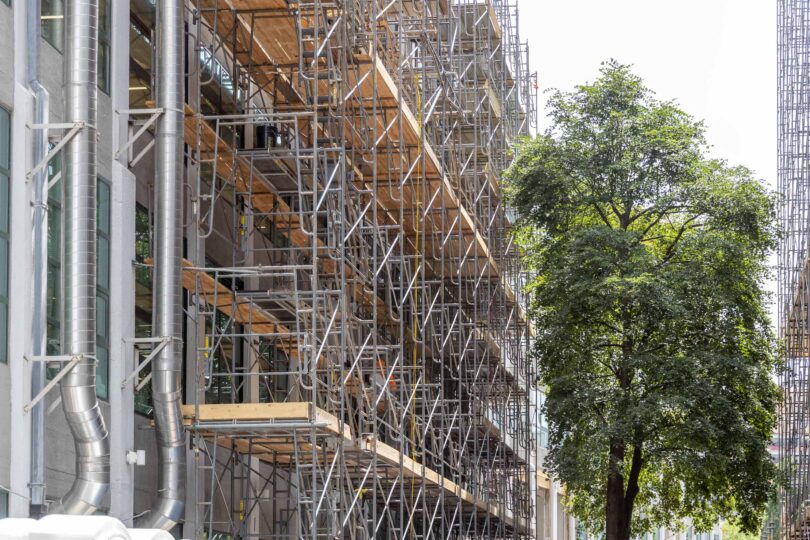 Marr Scaffolding Company’s Scaffold Division is installing over 1,300 linear feet of sectional scaffold at Buildings 1400 and 700 at One Kendall Square.

Cambridge, MA – Located in the heart of Kendall Square in Cambridge, One Kendall Square is a mixed-use campus with lab, office and retail space that spans 676,000sf. Since May, Marr Scaffolding Company’s (MSC) Scaffold Division has been installing scaffolding at two locations – Building 1400 (The Genzyme Building) and Building 700 – for general contractor Wise Construction, Winchester. 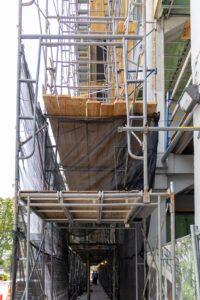 Due to the volume of scaffold product to be erected, a daily crew of up to 10 Marr scaffolders has been working in phases to install 200 linear feet at a time. As maintenance work on the facade is completed, crews dismantle and reinstall the scaffold, leapfrogging 100 feet to the next section. Debris netting has been installed alongside the scaffolding.

Throughout the project, Marr has worked carefully around numerous duct towers to provide full access to the facade of both buildings. At Building 1400, Marr has installed a sidewalk brow to provide overhead protection for pedestrian traffic, and has accommodated a high volume of vehicular traffic on busy Binney Street. At Building 600, overhead protection has also been built to protect a 30-foot-long AC unit and 30-foot-long main transformer at ground level.

Going forward, Marr will install scaffolding on a small portion of the front facade at Building 600 at One Kendall Square.