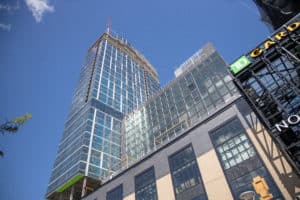 A total of 16 suspended scaffold platforms were installed for glass and curtainwall installation at The Hub on Causeway.

Marr Scaffolding Company was contracted by specialty contractor, The Cheviot Corporation, to provide suspended scaffold platforms for the installation of glass and curtainwall at the new Hub on Causeway, a high-profile, multi-use project under construction in Boston. John Moriarty & Associates is the general contractor for the project.

Located on the 2.5 acre site of the former Boston Garden, The Hub is a 1.87 million square foot project featuring office, residential and hotel towers developed by Delaware North and Boston Properties. 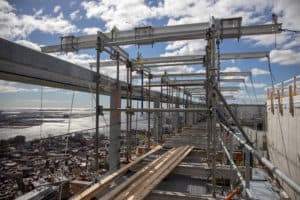 Marr installed roof rigging for 14 suspended scaffold platforms on The Hub’s residential tower’s catwalk, rather than to the roof itself, due to space limitations.

Since April, Marr has installed 14 suspended scaffold platforms from roof rigging mounted on the catwalk of the 38-story residential tower known as Hub50House. Due to significant space restrictions on the roof, an alternative to the traditional rigging system was devised that permitted the rigging setups to be built on top of the catwalk.

This solution required an engineer-designed configuration. It eliminated the need for counterweights and instead called for tying the back of the rigging beams into anchor plates bolted into the structural steel of the catwalk. Additionally, four of the setups were engineered to accommodate six-foot overhangs, adapted to the building’s architectural design. Two additional platforms were installed at lower elevations for Cheviot to complete vinyl glass work on the residential balconies.

The equipment was installed over two months and will remain in place for at least six months as multiple trades will utilize the platforms.

A second challenging feature, involving limited space, particularly given the hundreds of workers on site, has been access. An extremely tight footprint allowed for only Twin Alimak hoists, installed by Marr Crane & Rigging, to service the daily equipment and personnel needs not only for the residential tower, but also for the eight-story citizenM luxury hotel and a 31-story office tower that rise from the same, central podium.

Though a tower crane facilitated the transfer of most of the equipment to the roof, work crews have had to plan efficiently to contend with high elevator traffic.

Beginning in July, two more suspended scaffold platforms will be installed at the abutting hotel tower for Design Communications, Ltd. to hang the “citizenM hotel” sign.

Construction on the residence and hotel towers is set to be complete in late 2019.