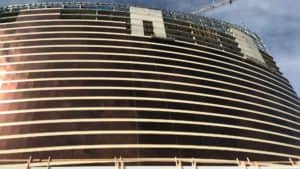 Marr Scaffolding’s roof rigging and shoring towers support swing stages on Encore’s North wall for the installation of windows by Ferguson-Neudorf and signage by YESCO.

Since breaking ground in the summer of 2016, Encore Boston Harbor has transformed the physical landscape of Everett, Mass., and has impacted the economic and social landscape of the city of Boston and beyond. When it opens in 2019, Encore Boston Harbor will be a sprawling 5-star luxury resort and casino situated on 34 acres along the Mystic River. As Daniel Marr & Son Company is wrapping up the extensive steel erection portion of the project, having installed over 12,000 tons of steel and metal decking, Marr Scaffolding Company has provided access equipment for the installation of the glass façade and the Encore signage on the exterior sheer walls of the 3 million sf structure. 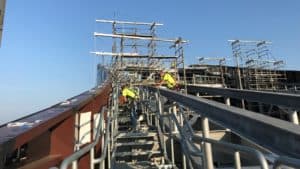 Marr erected eight swing stages for a distance of 185 feet for window installations on the two exterior sheer walls of the 350-ft.-tall curved glass tower.

Working for glass manufacturer Ferguson-Neudorf, Beamsville, Ontario, since November 2017, Marr Scaffolding erected five swing stages totaling 185 feet for the installation of windows on the two exterior sheer walls of Encore’s 350-ft.-tall curved glass tower. As the tower’s concrete sheer walls were poured, swing stages were needed to access the exterior façade to place the glass panels. Accordingly, Marr installed swing stages starting on the 10th floor, then moving up to the 26th floor, and finishing on the roof for the installation of 4,900 panels weighing between 700 lbs. and 1,800 lbs. each. On the northwest wall of the tower, one 56-ft. and two 25-ft. straight swing stages were installed, while on the southeast wall, one 35-ft. S-shaped swing stage and one 30-ft. L-shaped swing stage were installed. Daniel Marr & Son designed, fabricated, and installed 150 feet of I-beam monorail in the four different swing stage locations to facilitate positioning the windows. 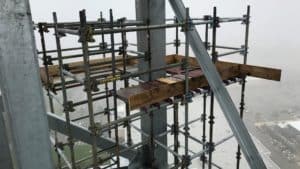 At the roof level, Marr Scaffolding erected 20 systems scaffolding towers on top of the sheer walls, building through the steel to rig the swing stages into place and complete the final installation of windows. Additionally, Marr built five 30-ft. “birdcages” or walkways around the steel, providing Ferguson-Neudorf access to the exterior to install clips on three sides of the steel frames and secure the windows in place.

All in all, Marr’s work at Encore has been and continues to be extensive. For Marr Scaffolding Company, Encore represents one of the most complicated swing stage projects in its history due to the demanding schedule, weather conditions, and location. Also, Marr Scaffolding provided 45 12-ft.-to-40-ft. scissor lifts and 12 80-ft.-to-135-ft. boom lifts to Daniel Marr & Son for the steel work contracted by General Contractor Suffolk Construction. Sister company Marr Crane & Rigging provided a variety of cranes during the steel erection phase, including several 90-ton cranes and their 300-ton Leibherr crane, which have been utilized throughout different phases of construction since work began in January of 2016.

Katherine Marr is communications coordinator at The Marr Companies.