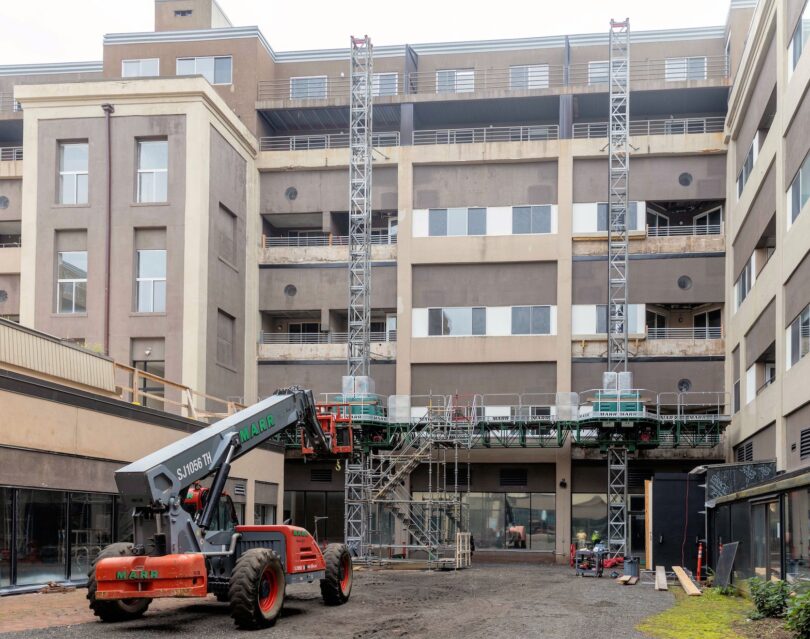 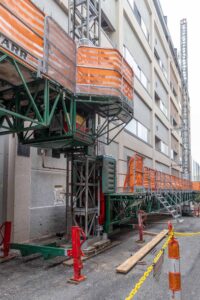 In a narrow alleyway off of Commonwealth Avenue, four twin F-300 work platforms are being installed in a split configuration, reducing labor costs and increasing efficiency.

The building is undergoing a complete interior and exterior renovation which will be phased over the next 18-24 months. Led by owner and general contractor Hamilton Company, the project includes the demolition of its exterior facade, comprised of block, brick and EIFS, down to its concrete shell. Following repair work, the original structural concrete will be waterproofed and insulated, and new metal panels and windows will be installed. MSC’s Mast Climber Division is installing four twin F-300 mast climber work platforms, two twin F-200s and one single F-200. These work platforms will be relocated around the building in phases as various trades complete their work. For glass contractor Salem Glass Company, Marr will install a monorail system and additional supports on the mast climber platforms so that the glass panels can be efficiently set in place.

Additionally, the concrete facade of the building’s interior courtyard is being restored. Here, Marr is installing two twin F-200s and a single F-200. The single platform will be elevated one floor above grade level over an indoor pool that divides the courtyard in two; prior to installation, shoring will be built to support the equipment. To maneuver the mast climbers into the courtyard, MSC’s sister company, Marr Crane & Rigging, is using a forklift to transport the units through a narrow egress created on the first floor.

MSC’s mast climbing equipment will be relocated several times around the perimeter of the building, including the street facing side during the final phase of the project.

Built in 1910, the four-story Packard Building was designed by Alfred Khan and built for Packard car dealer Alvan T. Fuller, who would later become a Massachusetts governor. The first of numerous, large-scale structures to comprise “Automobile Row” on Commonwealth Avenue in Allston, the Packard Building was expanded in 1928 to include an elegant showroom for customers. Popularity of the suburbs combined with urban growth and crowding in the 1970s forced the Packard dealership and others out of the Row, leading to many of the buildings being repurposed for residential, office and retail space.