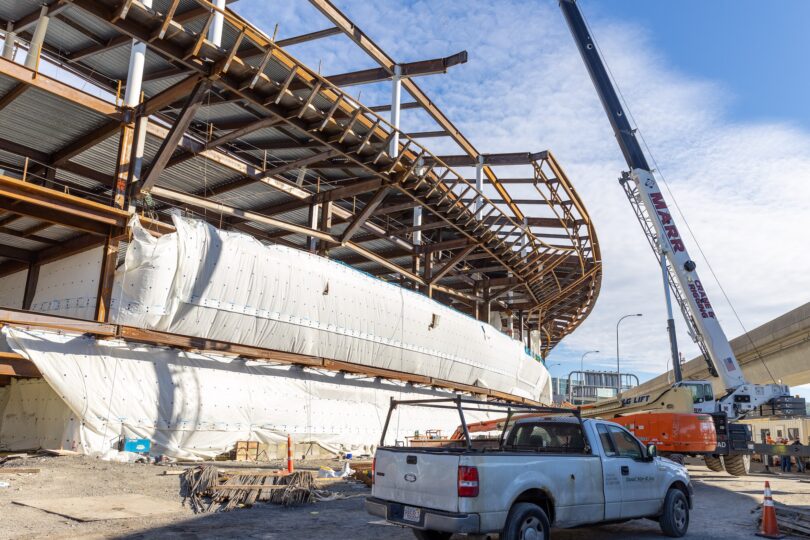 The cantilevered steel framing creates an "orb" effect, a prominent design feature of the new structure and a challenge to erect, requiring precise sequencing and tight tolerances to maintain proper elevation.

The massive project involves modernizing and expanding the existing terminal with roughly 320,000sf of new construction. Four new aircraft gates will be added to the international terminal and the building itself will become a sustainably constructed, high-performance and resource-efficient space. 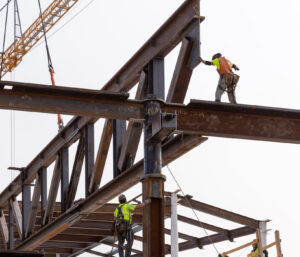 With the help of a 550-ton crane, DM&S sets a 65 ton truss over the existing CBIS facility to support the steel framing of the expansion’s new floor and roof above.

The new gates will accommodate more flights due to a forecasted increase in international travel. DM&S expects to complete work on the expansion in June.

For over a year now, DM&S has worked in multiple phases to connect the current terminal building with the new expansion, which spans over the existing Checked Baggage Inspection System (CBIS) facility. In September 2020, DM&S erected two massive trusses to span over the CBIS facility and support the steel framing of the expansion’s new floor and roof above.

Each truss, weighing approximately 42 tons and 65 tons, was shipped to the site in three sections and pre-assembled on the aircraft side of the tarmac. Once assembled, they were hoisted into position using a 550-ton hydraulic Liebherr crane. The operation required careful coordination with Suffolk Construction (GC) and Massport.

The prominent design feature that characterizes the project includes multiple roof levels that curve and slope in two directions. To support these elevations, DM&S installed 11 architecturally exposed and tapered bi-pod columns inside the building that reach as high as 60 feet at the peak of the roof.

On the landside of the expansion, DM&S is currently erecting the “ORB”: long cantilevered framing members that are being installed at varying elevations over a span of 500 ft. The installation has required precision sequencing to maintain tight tolerances and proper elevation and to accommodate facade components that cover several thousands of feet.

Additionally, DM&S is performing work inside the existing terminal for the construction of new elevators and various other renovations and upgrades. This portion of the project will be phased over the next couple of years.

Throughout the project, sister companies Marr Crane & Rigging (MC&R) and Marr Scaffolding Company (MSC) have been on site supporting DM&S in various capacities. MC&R’s 300-ton crane was utilized to erect and dismantle a tower crane, and a 90-ton rough terrain crane is currently in use for the ORB construction. MSC’s Aerial Lifts Division has several booms and scissor lifts on the project as well.