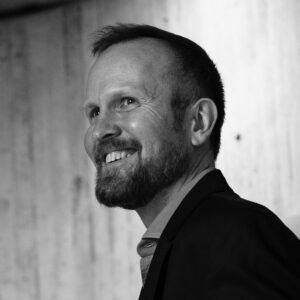 Mark Pasnik is an architect, author, and professor who co-founded OverUnder, a multidisciplinary practice engaged in architecture and design projects ranging from books to city design in the United States and abroad. His renown has centered on the challenge of preserving and rethinking concrete buildings from the modern era, most recently heading the firm’s work on a Getty Foundation-funded conservation management plan for Boston City Hall. He has been an activist in the effort to preserve the Government Service Center in downtown Boston, a building by the preeminent modernist Paul Rudolph, who was a gay man.

Not afraid to take on an unpopular battle, Pasnik is the “concrete guy” and this is the thread that connects his studies at Cornell and Harvard, his work as an architect and designer, his influence as a university professor and scholar, and his contributions to preservation.

Concrete modernism – often labeled with the term Brutalism – represents perhaps the single most controversial movement in architecture. Its monumentality and bravado are characteristics that may be considered either inspiring or dehumanizing. Yet Pasnik has helped bring a new appreciation to these misunderstood buildings. As a consequence, many that were once vilified are now gaining new appreciation.

With Michael Kubo and Chris Grimley, Pasnik is the author of Heroic: Concrete Architecture and the New Boston (Monacelli Press, 2015), which broke ground in the scholarly assessment of concrete buildings, receiving awards from Docomomo US, Historic New England, the Boston Society of Architects, and the Boston Preservation Alliance. An outcome of the popularity of the book is that the title term – Heroic – is being widely used as a new name for Brutalism, one that better reflects the original civic-minded aspirations behind the works.

Pasnik is also known for providing a renewed voice to the seminal men and women of the era through his research and publications, including two towering figures who passed away recently, Henry N. Cobb and N. Michael McKinnell.

Cobb was known for his skyscrapers around the globe, including Boston’s Hancock, and as a founder of New York’s Pei Cobb Freed & Partners. He died at 93 on March 2, shortly after Pasnik edited Cobb’s only book (Henry N. Cobb: Words & Works 1948-2018).

McKinnell, who won the competition for Boston City Hall at age 26, passed away from COVID-related causes at 84 on March 27. Pasnik worked closely with McKinnell to preserve his legacy of ideas and buildings.

Looking to the future, Pasnik has been leading studios at Wentworth Institute of Technology with dozens of aspiring architecture and design students, aiming to reimagine the future of important, yet often troubled, concrete buildings. His efforts have influenced civic conversations about preservation around structures like Rudolph’s Government Service Center (Rudolph passed away in 1997), which is currently in danger of partial demolition.

In 2019 Pasnik started a new initiative in conjunction with the city’s mayor’s office, where architecture students at Wentworth engage with high school students from Boston Public Schools to evaluate and reimagine a concrete building by Marcel Breuer in the Roxbury neighborhood.

Pasnik has taught at the California College of the Arts, Carnegie Mellon University, Northeastern University, Rhode Island School of Design, and Wentworth Institute of Technology, where he is currently a professor. He received the American Institute of Architects Young Architects Award and was a member of the executive board of Boston Society of Architects.

Pasnik currently serves as chair of the Boston Art Commission. In this role he has been an advocate for social justice in public art, most recently overseeing the public process that led to a unanimous vote to remove and recontextualize the Emancipation Group in Boston. The statue, showing Lincoln with his arm raised over a kneeling Black man, had been criticized for decades as a misrepresentation of history and a demeaning portrayal of the formerly enslaved figure, Archer Alexander. The vote on June 30 culminated two years of work and a series of public hearings. At a time when many controversial sculptures are being removed through illegal action, Boston’s process stands as a national model for deliberation and meaningful public discourse.