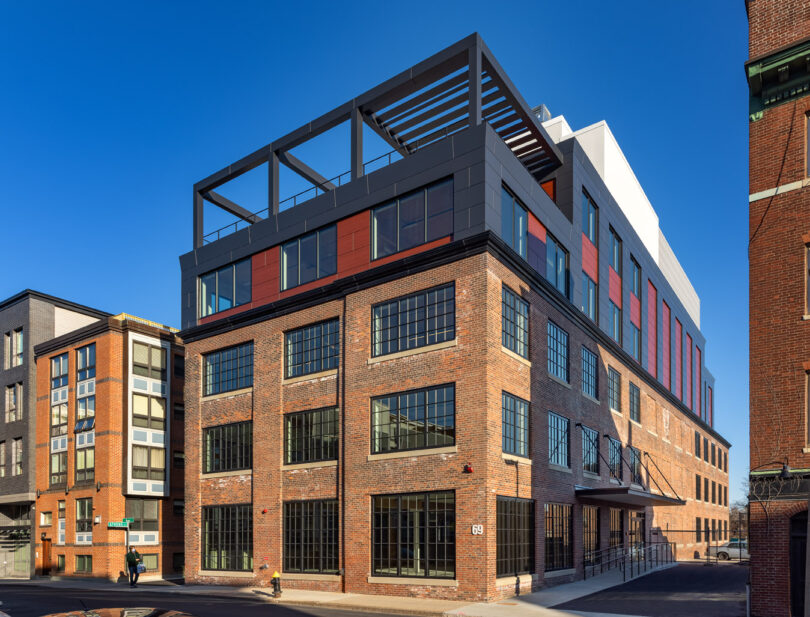 Boston – Architectural and interior design firm Margulies Perruzzi (MP) announced it has completed renovations and a two-story addition at 69 A Street in South Boston, creating a five-story 45,000sf building that is the first “cross-laminated timber” (CLT) addition to an existing building in downtown Boston.

The notable design accomplishment is that the building expansion would not have been feasible without the innovative use of CLT. This lightweight and highly sustainable structural system enabled the addition to be added to the 1920s-era brick and beam former Rivet factory without replacing the existing foundations or columns, which would have been impossible with a standard steel or concrete structure.

The exterior skin of the new levels is a metal panel rainscreen system installed with exposed metal fasteners that speak to its original use. Leaving the CLT exposed on the upper floors creates a more appealing wood interior than standard steel construction. As the existing building is constructed directly on the lot line, Margulies Perruzzi arranged for setbacks to allow for additional light on the south side.

A new entrance mid- building is accessed via a landscaped courtyard, allowing enlarged windows on A Street.  All the windows were replaced, but the existing building’s windows are distinguished from the new windows on the upper floors by being multi-light, which is consistent with the originals.  An open-air terrace directly off the fifth floor looks west toward the Boston skyline.

A major part of this project was the zoning approval process, including coordination with the BPDA and the community before any construction could begin, and regular communication with the abutters throughout the construction period.