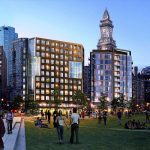 Boston – Another residential building is poised to join the projects under development along the Rose Kennedy Greenway, spurred by the new parkland’s open space and role in connecting Downtown Boston with the waterfront.

New Boston Ventures is eyeing a 12-story building of 52 residential units and first-floor restaurant/retail space at 102-112 Broad St. Finegold Alexander & Associates is the architect of record for the building.

The project would “fill in a gap in the urban fabric along the Greenway and create additional activity” after the Big Dig’s depression of the elevated central artery left “fragmented sites and rear façades facing the public parkland,” New Boston Ventures said.

New Boston wants to start building this summer. Plans call for restoration of a circa-1805 Charles Bulfinch-designed brick warehouse — a designated Boston landmark that would be integrated into the project as a lobby and residential space. An adjacent five-story commercial building would be razed.