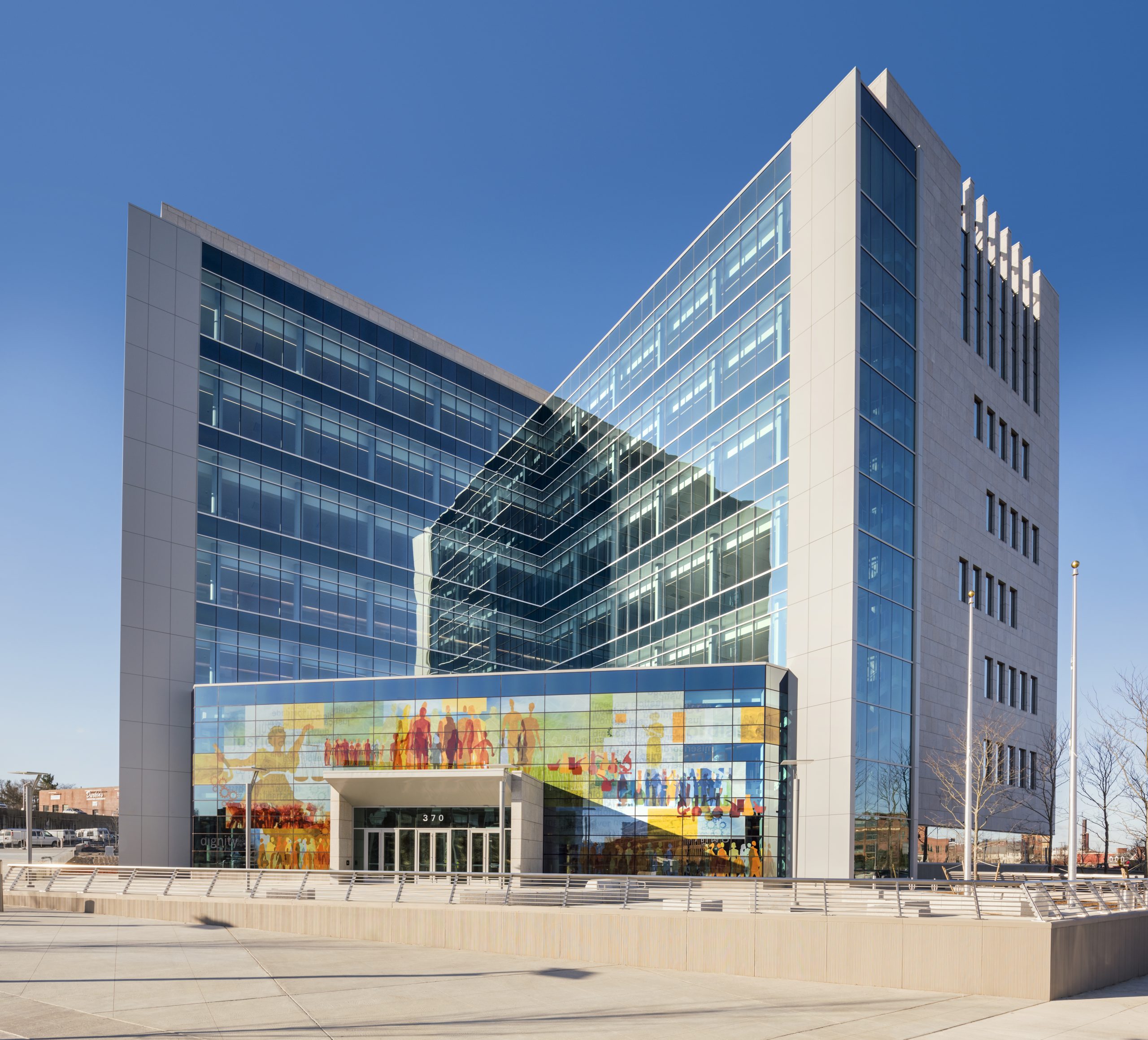 The courts and services offices were formerly located in outdated and dysfunctional buildings in Lowell and Cambridge. The new consolidated center is expected to receive a LEED-Platinum certification.

Located on a 3.2-acre site at the northern edge of the Hamilton Canal District within the Lowell National Historic Park, the 21st-century modern courthouse is the cornerstone of Lowell’s Hamilton Canal District development master plan. The nine-story building solves the design criteria of the modern courthouse, some recognized nationally, some particular to Massachusetts. 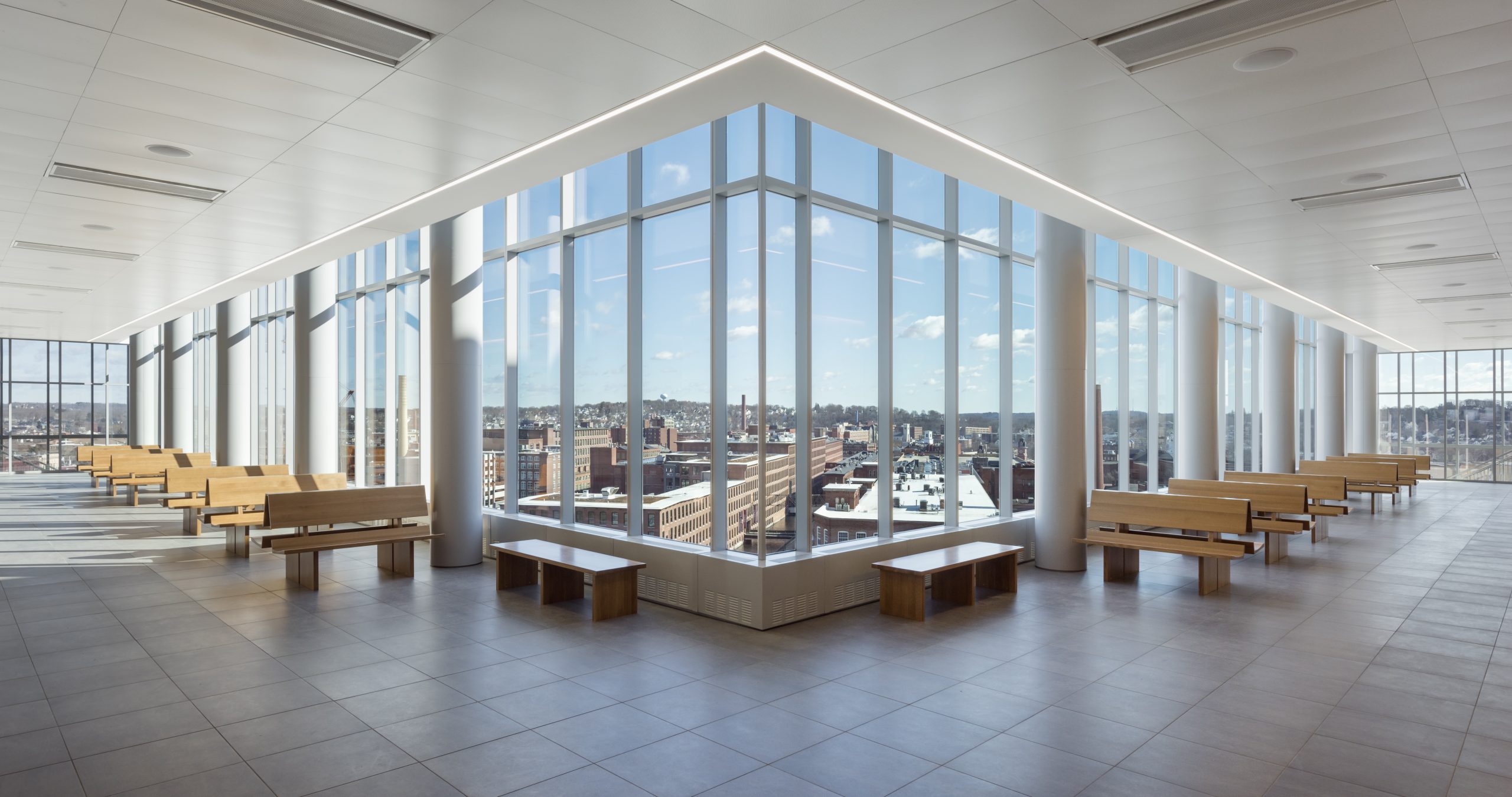 The two-story entrance lobby is designed as a special arrival space that can accommodate waiting lines of more than 100 at any time. The entire entry wall  contains a work of art in glass. It features symbols of justice, recalls the historic “mill girls,” and Lowell’s new industries.  Quotations and words about the value of justice are in four languages representing the many different origins of the citizens of Lowell.

The interior walls of the public circulation areas are covered with ceramic tiles, designed and selected to reflect Lowell’s textile history. In five earth tones, arranged in running bond, they evoke the bolts of cloth produced in the mills as well as the dynamic action of the looms themselves. 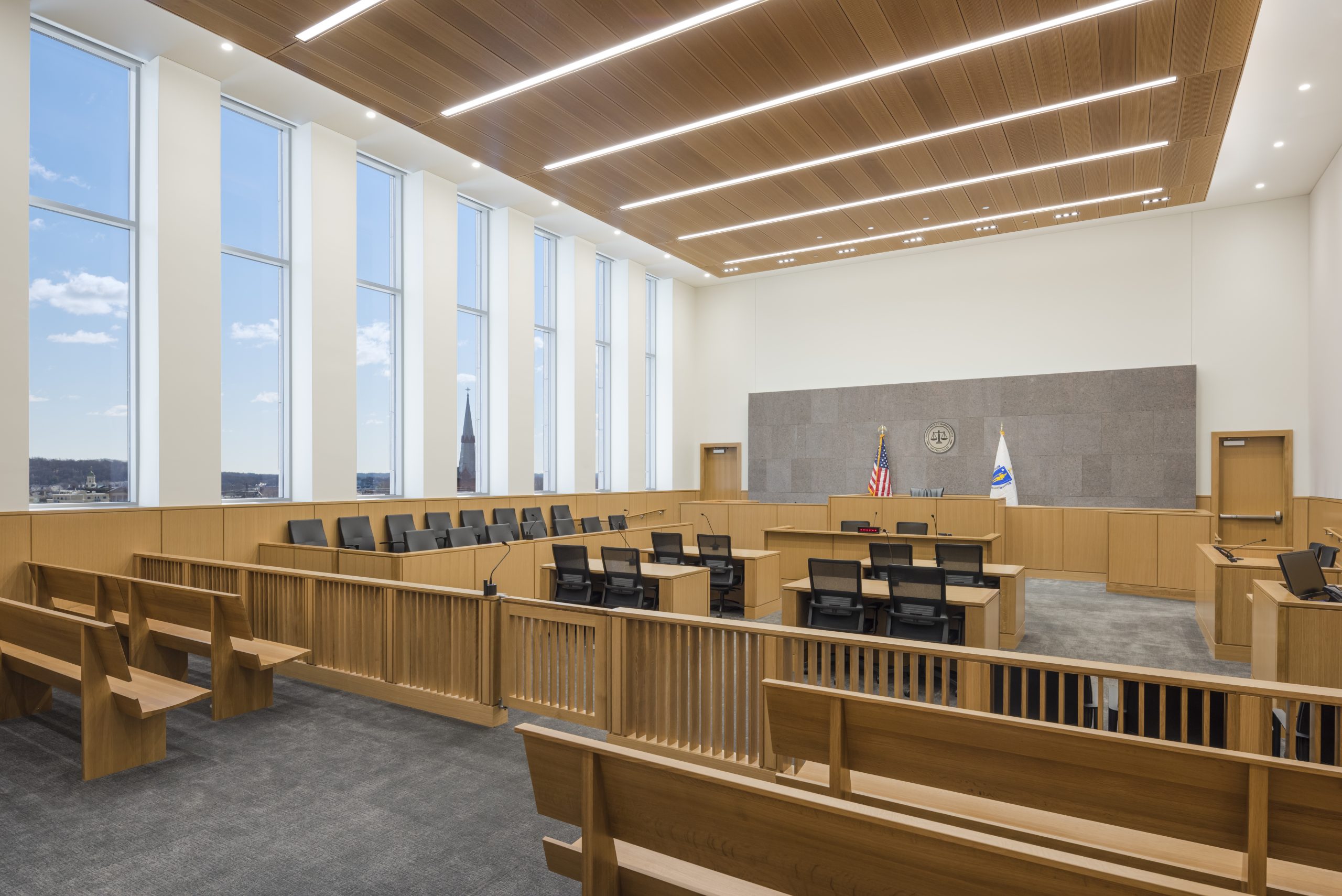 As one moves about the courthouse, there is an abundance of natural light: the entry hall, the public stairwells, the exterior wall of all public circulation and all 17 courtrooms.

The private spaces behind the courtrooms, including the judge’s chambers, the jury deliberation rooms, and the transaction areas also have abundant natural light. Selected materials on the exterior together with the glazing create an environment which is light and bright, reflecting the transparency of the rule of law in our democracy as well as creating an environment that is calming.

Judicial chambers are grouped into suites enhancing efficiency and collegiality and are located close to courtrooms or are no more than a floor away. Transaction areas for the clerk magistrate and probation functions are similarly grouped and easily identifiable at the midpoint between pairs of courtrooms.

The entire planning concept, while immensely functional for now, allows enormous flexibility to the courts as future shifts in caseloads or development of other special court needs might require.

The center is designed in orientation to the site in many special landscaping features, glazing, highly insulated walls and very sophisticated mechanical and lighting systems to be a most energy efficient courthouse, which soon after verification will be awarded LEED Platinum designation, the first courthouse to achieve this designation in Massachusetts.

Each courtroom is designed to hold jury trials and to have access to detainees, either directly adjacent to the courtrooms or in the basement holding area. That area is designed to provide sight and sound separation between men and women and between juvenile male and females. Non court functions, the District Attorney suite, the register of deeds, jury pool, and the public assistance area for pro-se defendants are all located on the first floor just beyond the security checkpoint.

The designers opted for a rational stacking of the courts departments and their 17 courtrooms to facilitate wayfinding. The most active, arraignment and district, are on the lower floors, 2 and 3; the juvenile is on 4; the more private and potentially volatile probate and family and housing courts are on 5 and 6. The superior court is on 7.

Special spaces have direct light from the side or for interior courtrooms, have borrowed light from a deep transom behind the judges. These are expressed on the exterior as a group of punched windows in the granite walls or in the deep indentations on the building’s facade.

The work was designed by artist Martin Donlin of the UK who won a competition sponsored by the State Agencies, reclaiming a concept of art in public buildings.

The cutting-edge facility houses the operations of the Superior, District, Housing, Juvenile and Probate, and Family Courts. It also contains office space for court staff, a Court Service Center, Law Library, the Registry of Deeds, Office of the District Attorney, and a Grand Jury Room, with a total of 17 courtrooms and associated detainee holding cells.

This comprehensive Judicial Center for Lowell achieves goals of functionality, maintainability, accessibility, security, and sustainability all housed in a structure that  speaks to dignity and is a positive contribution to the historic City of Lowell.

The center is universally accessible: the commuter rail station and local bus depot are a short walk away; a new parking facility by Lowell is being constructed to provide easy access for those arriving by car; bike racks are on site as well as immediately adjacent handicapped parking spaces; and secure parking for judges and senior staff as well as secure access for detainees through the sallyport are also provided.  Sloped walks traversing a 25- foot change in grade across the site lead to an entrance plaza without any steps. This universally accessible concept continues within the entire building with ample circulation space, multiple elevators, accessible raised judge’s benches, abundant wheelchair spaces in courtrooms, audio and visual technology, and glazed stairwells at each end of the public galleries to encourage walking while enhancing wellness.

The project originally began with a certifiable building study and was the largest of three pilot studies for the Commonwealth of Massachusetts’ Division of Capital Asset Management and Maintenance (DCAMM)s ZNE initiatives. A goal in the design of this courthouse is to maximize energy efficiency and it is expected to achieve a LEED-platinum certification. The building contains a chilled beam HVAC system, photo-voltaic panels, and a sophisticated building envelope. Building systems and controls among many design features were specified to achieve performance targets 40% better than code.

Finegold Alexander Architects -“We are embracing context, thriving on collaboration, and working tirelessly to solve problems. In this way, we create spaces and places where communities thrive, the past is embraced, and the future is made. These are our core values. Together, we are Boundless.”