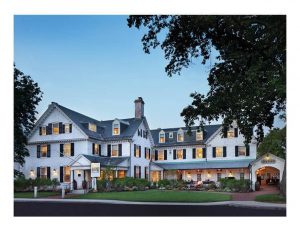 In 1926, Architects Putnam and Cox designed the 46,000sf Lord Jeffery Inn for Amherst College. The inn holds a unique place in literary history because it is where poet Robert Frost frequented as a guest between 1949 and 1963.

In 2009, the inn underwent an extensive restoration and expansion. NCA worked closely with the college to incorporate effective and efficient means of conserving energy, water, and other natural resources while still providing guests with modern touches that address the evolving needs of today’s traveler.

The Lord Jeffery Inn ranks as one of Pioneer Valley’s greenest hotels, one of only two hotels in Massachusetts with LEED Silver certification, and one of three member hotels in the Historic Hotels of America Program to achieve this level of recognition.