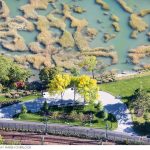 Boston – The new Logan Greenway Connector, a 2,790-foot-long multi-use path, is now open to bicyclists and pedestrians. This LEED certifiable 25-foot-wide urban corridor runs through Logan Airport in East Boston. The Mass. Port Authority spent $5.58 million on the construction of this project and completed it in August, 2014.

The Greenway Connector serves the neighborhoods near Logan Airport, Boston Harbor, and the Wood Island Bay Marsh. It links to the rest of the 3.3-mile East Boston Greenway, other parks, and two MBTA stations. It is the next-to-the-last missing link in a linear park that connects Piers Park to Constitution Beach. The final link, now known as the “Narrow Gauge,” will be built in 2015.

The implementation of this complicated missing link required numerous approvals, including FAA approval in a restricted fly zone, compliance with airport security, removal of a dangerous pedestrian bridge, acquisition of two city properties, and MBTA approval of construction along the Blue Line right of way. The community approved the concept design for this significant new linear green corridor in less than four months. The public is now enjoying the benefits that result from the successful collaboration of public federal, state, and city government agencies, nonprofits, and community advocates. The Boston Natural Areas Network and the East Boston Greenway Council advocated tirelessly for many years to bring their dream for a linear park for this community to fruition.

The design transforms this long, narrow corridor to a generously proportioned green space. The unexpected open areas, Neptune Green, the MBTA Plaza, and the Marsh Overlook along the half-mile route, change the feel and experience of the pathway. At the marsh, the visitor finds an overlook with panoramic water views to a salt water marsh, the airport, and the Harbor Islands. Trees and colorful plantings frame the view.

The pathway passes through the Wood Island MBTA Station Plaza. Bike racks facilitate intermodal commuting.  Ornamental fencing separates the MBTA Plaza from Wood Island Road, and the path continues parallel to the MBTA tracks. Safety and sustainability were community concerns. LED post top lights, ornamental gates, and security fences along the airport and MBTA tracks, call boxes, security cameras, and a protective rail at the Marsh Overlook all contribute to the public’s safety.