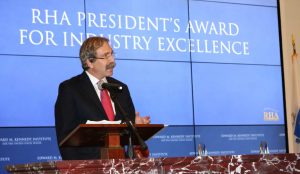 Boston – Lawrence H. Curtis, president and managing partner of WinnDevelopment, has been honored with the 2015 Rental Housing Association Industry Excellence Award, recognizing his community and civic involvement and professionalism in all aspects of multifamily development, ownership, and management.

Curtis, who joined WinnCompanies in 1987, is a highly respected advocate for innovative city, state, and national policies to promote both affordable and workforce housing. In July, he was named chairman of the Workforce Housing Affordability Committee of National Multifamily Housing Council.

He serves on the board of trustees of the National Trust for Historic Preservation. He is the past president of the National Housing & Rehabilitation Association (NH&RA) and a member of the board of directors of the Citizens Housing and Planning Association. He has received numerous awards, including the 2006 Paul E. Tsongas Award from Preservation Massachusetts, the 2008 Affordable Housing Vision Award from the NH&RA, and the 2013 Lawyers Clearinghouse Leadership Award.

“Larry is an unrelenting champion of historic preservation and housing for working families. As our partner, his passion has been instrumental in the growth and success of WinnCompanies,” said Gilbert Winn, CEO of WinnCompanies and RHA president. “I am thrilled to see him receive this well-deserved credit for his vision, determination and real life results.”

The honor for Curtis, who was introduced at the RHA event by his wife, Marla, included a poignant and humorous tribute video.

“Larry Curtis has dedicated his life to building safe and affordable places for people to live,” said Greg Vasil, CEO of the Greater Boston real Estate Board. “His successes are noteworthy, but his style is so humble and unassuming that it is only fitting that we celebrate him as the President’s Award recipient in 2015.”

The mission of the committee is to develop solutions to the nation’s rental housing affordability challenges. Members include developers, owners, managers, syndicators, lenders and legal and accounting experts from across the United States.

“Larry is the most driven and brilliant person that I know,” said Michael Putziger, chairman of the board of WinnCompanies. “He is a natural leader in our field and within our company, so this honor is well deserved. I am proud to call him my friend and colleague.”

In addition, Curtis co-founded New Lease, a non-profit based in Boston that provides a clearinghouse of affordable housing units for families staying in state-funded shelters and motels throughout Massachusetts.

He is the third WinnCompanies executive to have received the Industry Excellence Award since the RHA instituted the honor in 1992. Arthur Winn, the company’s founder and principal, won it in 1995 and William Wollinger, then-president of WinnResidential and nowthe chief operating officer of WinnCompanies, won it in 2009.

The RHA is a member of the Greater Boston Real Estate Board and was established in 1953 as the industry voice for multifamily owners and managers, as well rental agents, realtors, brokers, vendors and suppliers, across Massachusetts. Boston Mayor Martin J. Walsh also was honored with Curtis, receiving the RHA President’s Award for Excellence in Public Service.