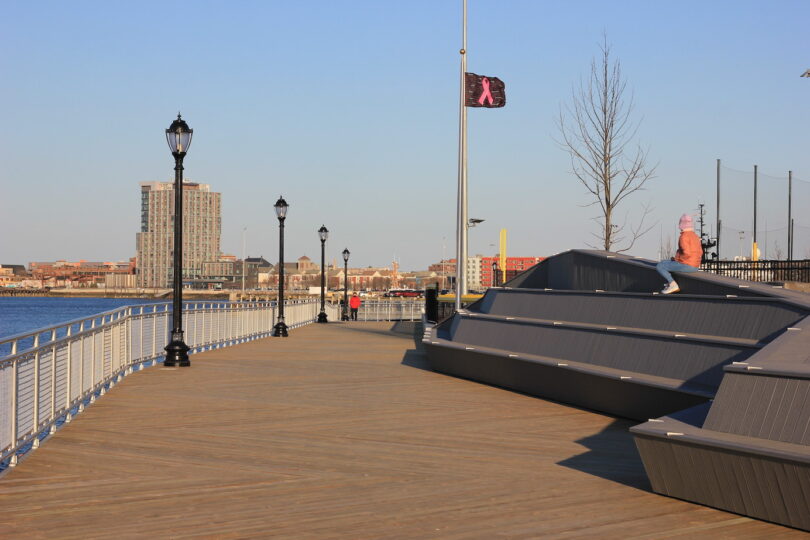 by Cheri Ruane and John Frey

There’s little argument that the impacts of climate change and sea level rise along our coasts are steadily becoming more frequent and intense. According to the National Oceanic and Atmospheric Administration (NOAA), global mean sea level has risen about 8 – 9 inches since 1880, with about a third of that coming in just the last 25 years. 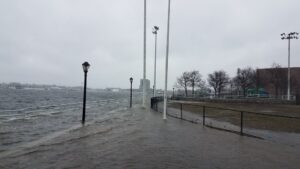 The rising water level is mostly due to a combination of meltwater from glaciers and ice sheets and thermal expansion of seawater as it warms. For example, in Boston in 2015, sea level rise in combination with a “king tide” created a tide that was two and a half feet higher than average, causing Boston Harbor to overtop seawalls with several inches of water in many areas, flooding walkways, parking lots, roads, and even some basements. If there had been a significant storm at the same time, the damage could have been much worse.

Then, in January and March 2018, the city experienced its highest water levels during Nor’easters that coincided with king tides resulting in significant neighborhood flooding, property damage, and flooding of critical infrastructure including the subway system. At the same time, cities are experiencing higher temperatures in their urban cores with days over 90 degrees Fahrenheit projected to increase.

In the face of these growing concerns, cities are trying to quickly adapt their shorelines to protect their lowest lying neighborhoods. Waterfront sites, parks, and landscapes are our best lines of defense in our quest for resilient communities. Such parks and open spaces along our waterfronts can mitigate the impacts of extreme water level events for both near and long-term scenarios by integrating coastal protection strategies like berms, raised sea walls, and higher elevations into their designs. They are also instrumental in providing respite and urban heat reduction through tree canopy, cooler air, and shade.  The ability and success of these waterfront parks in combatting climate change requires interdependent teams of professionals, including hydrologists and engineers, led by landscape architects.

But why, you may ask, are landscape architects best suited to lead these teams? The reason as we see it is that landscape architects are trained to design with people as the subject of the design problem and incorporate the dizzying number of other factors that also must be considered. These include live load, rain drop, vehicle needs, rising tides, urban heat islands, filled tidelands, and a host of others. In fact, in 2020, the American Society of Landscape Architects convened a Blue Ribbon Panel on Climate Change and Resilience, which produced a report: “Smart Policies for a Changing Climate.”

The report sets out “core principles, key planning and design strategies, and public policies that will promote healthy, climate-smart, and resilient communities.” Waterfront parks and other public spaces, while serving as a tip-of-the-spear approach in our battle against sea level rise and urban heat, are also asked to be multi-functional, simultaneously serving as recreation areas, places of calm and relaxation, meeting spots, picnic areas, and much more. It is people that will be using these landscapes to commute, take their lunch breaks, meet with colleagues, and generally improve their quality of life. And it is landscape architects, with their focus on the users, that can rally the other engineering and science disciplines to meet the increasingly important demands placed on our waterfront public spaces.

To sum up, as we face an uncertain future for the redevelopment of our waterfronts, there’s one thing you can be sure of: Landscape architects will save the world!