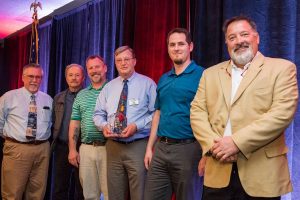 Hinckley, ME – Landry/French Construction Company has won a first place award in the 2016 Build Maine Awards Competition for its restoration and addition of the Charles E. Moody School at Good Will-Hinckley, home to the Maine Academy of Natural Sciences.

Sponsored by the Associated General Contractors (AGC) of Maine, the award was presented at the AGC’s annual event at the Augusta Civic Center in April. This marks the second consecutive year that Landry/French has won a Build Maine Award, with last year’s honors recognizing the new State of Maine Offices in South Portland.

The renovations and additions to the 110-year-old building were designed by Harriman Architects + Engineers.

The PV system includes 267 photovoltaic panels installed on the building and are expected to deliver 91,000 kWh of power. The Moody School will use approximately 77,000 kWh annually, leaving a net positive of 14,000 kWh of clean, renewable power. This will offset the energy needs of adjacent greenhouses and other facilities on campus. The energy cost savings is estimated at $1.3 million over 25 years.

The project received the award based on the significant contributions it has had on the community, the challenges overcome during construction, the innovation used in achieving a net-positive energy facility, and the environmental value of reusing the existing building.

Achieving net-positive energy, especially in an historic building requires innovation in both the design and construction. To achieve this, many innovative measures were used including a photovoltaic (PV) solar energy, grid-tied system; a well-insulated building envelope and efficient systems contributing to the low-energy demand of the building; a building envelope designed to

There were numerous challenges on the project including serious deterioration of the building, numerous unknowns and unforeseen conditions, and record cold and snowfall causing major delays throughout the winter. Despite those challenges, the project was completed on time and on schedule.

“We are extremely proud to have received this award for Maine’s first net-positive energy academic building, and to have been involved in such an important project that will forever change the lives of hundreds of young students in Maine,” said Vice President Kevin French.