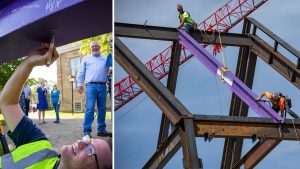 Scott Westerbeke, an architect at GUND Partnership and one of the designers of the library, was onsite to participate in the festivities. / Photos courtesy of Kenyon College

Gambier, OH – September 10 marked an occasion to celebrate in the construction of the new library at Kenyon College designed by GUND Partnership. The entire campus community and design and construction teams were invited to sign a structural steel beam painted Kenyon’s signature purple.

The beam signing was followed with a ceremony to mark the topping off of the library. Kenyon president, Sean Decatur, officiated the ceremony and unveiled the building’s new name, a name that is borrowed from the past, Chalmers Library. After the name was announced, spectators watched as Smoot Construction hoisted the purple beam to the top of the new library.

Construction will be complete by the end of 2020, with an opening planned for spring 2021.

The original Chalmers Memorial Library opened in 1962 and was named for Gordon Keith Chalmers, Kenyon’s 13th president, who served from 1937 until his death in 1956. The new Chalmers library will also recognize his wife, Roberta Teale Swartz Chalmers H’60, a poet, teacher and co-founder of the Kenyon Review.

Chalmers Library replaces Kenyon’s existing Olin and Chalmers libraries, which were not optimized for 21st century learning and were at their physical limits. The new library is expecting LEED Gold certification and presents one of the largest opportunities to reduce Kenyon’s carbon footprint through signification energy savings.

The new highly flexible state-of-the-art library will support active and collaborative learning and will feature a variety of environments to encourage student growth, curiosity and exploration. Academic Advising, Career Development, the Registrar and Student Accessibility Services will move to the library as an integrated hub connecting work inside the classroom with work outside of it.