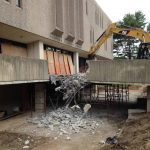 KBE is construction manager at risk for the renovation and addition at Connecticut College. The project comprises 41,000sf of renovations to the existing three-story library, plus 4,600sf of additions, including a new three-story entrance with clerestory, enlarged windows, and mechanical and electrical upgrades.

KBE has also managed construction for several Maryland institutions, including Hood College and the University of Maryland Baltimore County (UMBC).