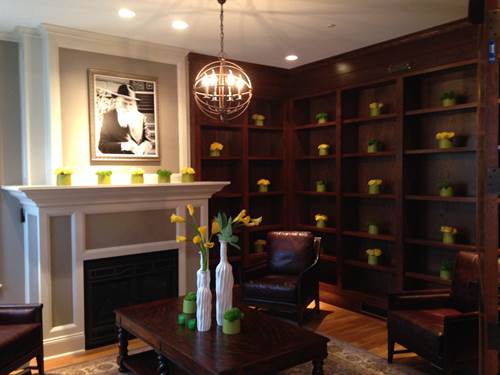 One of the many beautiful rooms at the new Chabad House on the campus of Yale University.

The ceremonies included the groundbreaking at J.M. Wright Technical School in Stamford and the ribbon cutting for the opening of the Chabad House at Yale University in New Haven. The Governor’s presence underscores the importance of these construction projects in their communities – not only a high profile, higher-cost school project, but also a lower profile, smaller project.

One of Connecticut’s 18 technical high schools, J.M. Wright was closed in 2009 following declining test scores and enrollment, and the state’s budgetary struggles at that time. When the school reopens in fall 2014, 144 freshmen will be enrolled in such programs as automotive, culinary arts and science, E-Carpentry, E-Electrical, E-Plumbing & Heating, facilities management, health technology and tourism/hotel/ hospitality.

KBE is serving as the construction manager at risk for the $56 million renovation of the education facility. The project will be completed in July 2014 in time for the new school year. Most of the 199,135sf technical school is undergoing renovation, while 1,550sf of new construction will also be added.

“It’s a very aggressive schedule, but our guys are up to the task, working six days a week, sun-up to sundown,” said Mike Kolakowski, President and CEO of KBE Building Corporation. “Some of these kids will be working on KBE jobsites in the not-too-distant future, so it’s nice that we’re building the school where they’ll learn these noble trades.” Although the formal groundbreaking ceremony occurred in October, the project is already well underway, at nearly 50 percent complete.