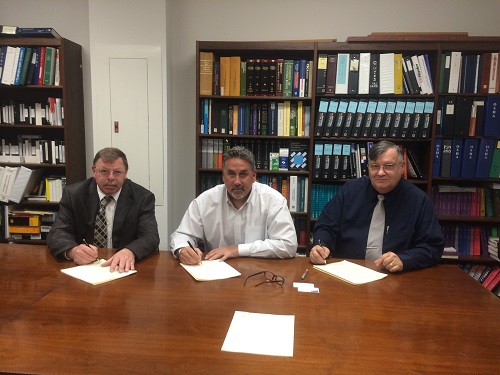 Bridgeport, CT – The U.S. Department of Labor – OSHA, Bridgeport Area Office  and the Connecticut Department of Labor, Division of Occupational Safety and Health (ConnOSHA) have entered into a new partnership with KBE Building Corporation promoting jobsite safety and health.

KBE has won Safety Training & Evaluation Process  Awards of Achievement from the Associated Builders and Contractors, Inc. – Connecticut Chapter  every year since 1995. Most recently, KBE won the “Best of the Best Safety Award” for General Contractors in Connecticut in 2012 and 2013.

KBE  also has received Safety Recognition from the Associated General Contractors of America. The AGC has recognized the firm with “Excellence in Construction Safety and Health” awards from 2010-2013. In 2013, the AGC also honored KBE Safety Director Adam Peters with the award for “Construction Safety Professional of the Year in Connecticut.”

OSHA officials and KBE vice president of field operations Anthony Maselli signed the agreement on March 27. Among those present were Kenneth C. Tucker, lll, director of CONN-OSHA’s Wethersfield office and Robert W. Kowalski, area director of the Bridgeport area office. The partnership will last through completion of the Jewish Senior Services Project, scheduled for the summer of 2016.