Boston – Kaplan Construction announced the completion of an addition, restoration, and renovation of the historic Congregation Kehillath Israel (KI) in Brookline that began as a small collective in 1911 and was granted a charter by the commonwealth of Massachusetts in 1917. 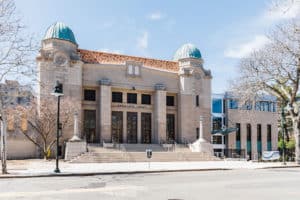 Over the course of 10 years, Kaplan provided preconstruction and construction management services for the extensive project, that included the reconstruction of two existing buildings, along with a 10,000sf addition to the property.

The renovated synagogue, which features stone columns quarried from Jerusalem and a custom Spanish tile roof, now hosts a new sanctuary, social hall, offices, preschool, and a dedicated space for Congregation Mishkan Tefila, who has colocated with KI on its Brookline campus.

The project was completed in two phases. Phase 1 consisted of an extensive exterior renovation of the existing sanctuary building and schoolhouse on-campus buildings, that were originally constructed in 1924. 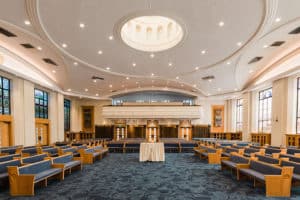 Highlights of Phase 1 included restoration of the 100-year-old tile roof as well as the brick-and-stone façade of the buildings. Phase 2 included the interior renovation of the sanctuary and adjacent school building, totaling 30,000sf. The interior renovations required heavy structural modifications, with the installation of new bathrooms and modern HVAC, mechanical, and lighting systems.

During the second phase of the project, a 10,000sf addition was completed, which included a catering kitchen and social hall that connects to the sanctuary through a sunlit atrium and will be used for hosting special events. 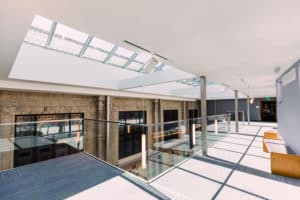 The preschool classrooms have been moved to a single, secure location with direct access to the playground and gardens, and the main office was moved to the front of the building.