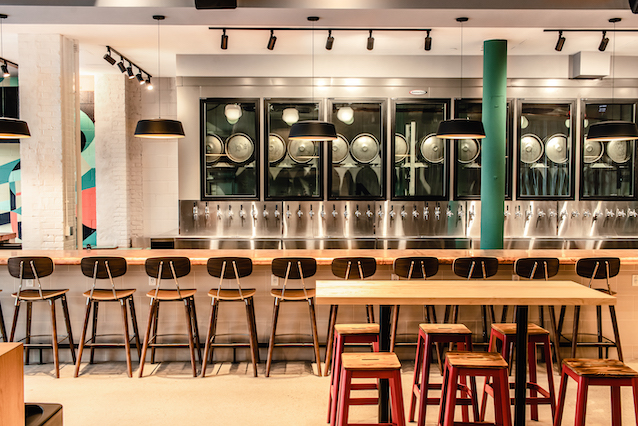 Located within an existing industrial building, the South Boston location features a 4,000sf main tasting room with seating for 220 people, a retail area, and a 1,900sf private event space which can accommodate up to 140 people. A quarter of Castle Island’s new space accommodates the brewing operations, including a brewhouse and seven 10-barrel tanks. A large focal wall is made from wood and metal and features the Castle Island Brewing Company logo.

The building is a turn-of-the-century high-bay manufacturing space with 15-to-18-foot ceiling heights, industrial beams, and exposed concrete. Kaplan cut out a section of the existing exterior wall and installed a new overhead door to create a seamless indoor/outdoor experience and maximize natural light. In addition to removing a series of interior overhead doors, Kaplan demolished existing walls at the front of the building to make room for tap room seating and new bathrooms. Two existing glass garage doors were retained to provide access to an outdoor patio for brewery patrons.

At the start of construction, Kaplan uncovered several unanticipated existing conditions in the century-old building despite multiple exploratory efforts performed by the design team and landlord. During concrete removal to accommodate the underground plumbing, it was discovered that the slab was three times as thick as the original exploratory work indicated. As such, the construction team had to work with the structural engineer on determining the best approach to address the cutting and infilling of the structural slab. Numerous underground obstructions, such as abandoned concrete structures, construction debris from past projects, and layers of old concrete slabs, were also encountered as the team excavated for plumbing to service the bar and brewing area. As demolition progressed, it was also revealed that the original bathroom plumbing had deteriorated significantly and required a full replacement. In addition, Kaplan had to demolish and rebuild several existing walls around the bathrooms due to their poor condition.

In 2015, Kaplan converted an existing warehouse at 31 Astor Avenue in Norwood, Mass. for Castle Island’s first brewery. In 2017, Kaplan was hired again to expand their production area and build out a taproom at their flagship location.

“This was our third project with Kaplan since we opened in 2015 and, once again, the team did a phenomenal job, particularly in negotiating some tricky, unanticipated conditions below-slab,” said Adam Romanow, founder and president of Castle Island Brewing Company. “This building has a strong personal significance to me as it used to be owned by my great-grandfather. I was very touched when the Kaplan team found an old blueprint of the building in the walls and had it framed for me to display. That level of thoughtfulness is unmatched in the industry.”