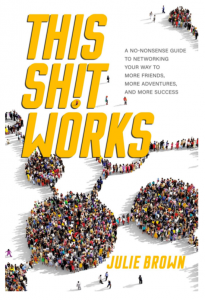 Boston – Julie Brown, founder of JBBD Inc., has recently released a new book called “This Shit Works: A No-Nonsense Guide to Networking Your Way to More Friends, More Adventures and More Success.” In the guide, Brown shares her proven process for building your own power network.

Brown says, “The people you meet can change your life like nothing else. Networking is how you meet those people. Not the trading business cards and asking, “What do you do?” kind of networking – the kind where you make the most extraordinary connections simply by being yourself and doing things you enjoy.”

Filled with honest stories, more than the occasional swear word, proven strategies, and targeted to-do lists, ​Brown says, “This Shit Works”​ is a salty, modern version of ​”How to Win Friends and Influence People​.”

Brown is a networking coach, business development strategist and public speaker who has helped countless people transform their careers through networking. The book is available for purchase on Amazon and at all major online bookstores.