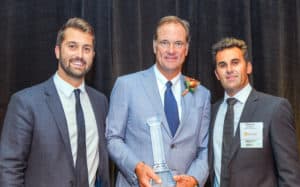 Boston – The Massachusetts Building Congress has honored John B. Hynes III, the CEO and managing partner of Boston Global Investors, with the Skyline Award for Outstanding Achievement.

The award was designed to recognize those in the AEC and real estate industries who have made significant contributions to the built environment and the community, and Hynes is one of the few people to receive the honor in MBC’s 97-year history as an organization.

“I gratefully accept and I’m flattered, not only by the award but from where it came,” said Hynes. He thanked his friends and colleagues in attendance and spoke modestly about his career, which, among his other achievements, includes developing the New Songdo City project, a U.S. $35 billion, 100 million sf master planned city near Seoul. The project is one of the largest private real estate developments in the world to date. He also led the development of Seaport Square, a 6.3 million sf ($3.5 billion) master plan through the acquisition, permits, and entitlements phase, and developed 60% of the project before selling to WS Development in 2015. 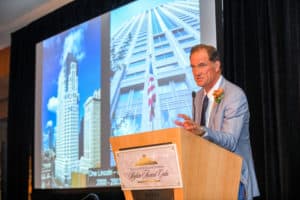 John B. Hynes III at the podium

Hynes’s affection for the industry was apparent, and in his speech he reflected on his decades-long career and having “stumbled into” an industry where he’s able to “improve quality of life in the community in which I live.” He emphasized the importance of the commercial construction industry in the city of Boston, and in the country as a whole, and spoke about the joy of “competing and raising capital and team-building and the collaborations in order to get these projects done,” and creating lasting friendships along the way.

Hynes spoke of Boston’s humble beginnings, with just 15,000 people in 1775 when Boston was roughly four square miles, and took the attendees through a brief history of Boston’s growth pre-World War I through to present date, that is now over 89 square miles and has a population of over 685,000.

“It’s always been a thrill and a challenge to be involved in things that improve the city, improve the quality of life,” said Hynes. “The most rewarding experience for me was looking back on these finished projects and reflecting on the number of people who would benefit from the imagination, the hard work, and the capital that was risked on each of these ventures.” 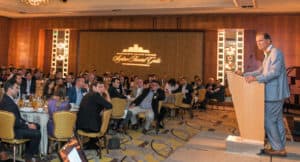 Hynes recognized all of the people behind the scenes — developers, architects, engineers, lenders, city and state officials, suppliers, fabricators, movers, restaurants, and insurance companies — and noted that “for every 1 million square feet of new construction, there are 10,000 project-associated jobs and 5,000 permanent ones.” He added, “In my almost 40 years in this business, I’m the most proud of the jobs we have created.”

Hynes ended his speech by looking to the future. “All of this tremendous growth in the last decade has been phenomenal for all of our professions; however, there are circumstances and consequences of growth,” he said. He urged his colleagues in the crowd to always remember to remain charitable, and to “take care of those who can’t take care of themselves.” He encouraged them to continue to invest in education, to prioritize affordable housing, and to improve and expand public transportation to accommodate the population growth in the city.

“Be courageous. Support your country. Be a good citizen. Use your voice. Use your vote,” he said. “But most of all, be kind.“