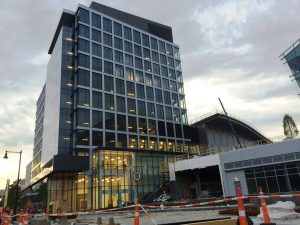 The arena seats 660 fans, keeping with the intimate experience for those who will attend events there. It is solely dedicated to hockey.

“We are thrilled to have had the pleasure of taking on the installation of this,” said John Guarracino, project manager of JM Electrical.. “We are big Boston sports fans at JM, and couldn’t be happier to contribute to operations at the state-of-the-art practice rink for our own Boston Bruins.”

“There were many components associated with the ice rink system in the arena,” said Jay Rourke, project manager at NB Development Group and general manager of Warrior Ice Arena. “It was a pleasure working with JM, as the company’s staff is so skilled and experienced in the field.”

Work at the arena site began in December, 2014 and JM began installations in January of this year. It is adjacent to a 10-story office building, part of a 15-acre Boston Landing project.

The project is the latest in a string of prominent jobs complete by JM, including the 85,000sf Hanscom Air Force Base Middle School and the 333,500 sf PricewaterhouseCoopers building in the Seaport.