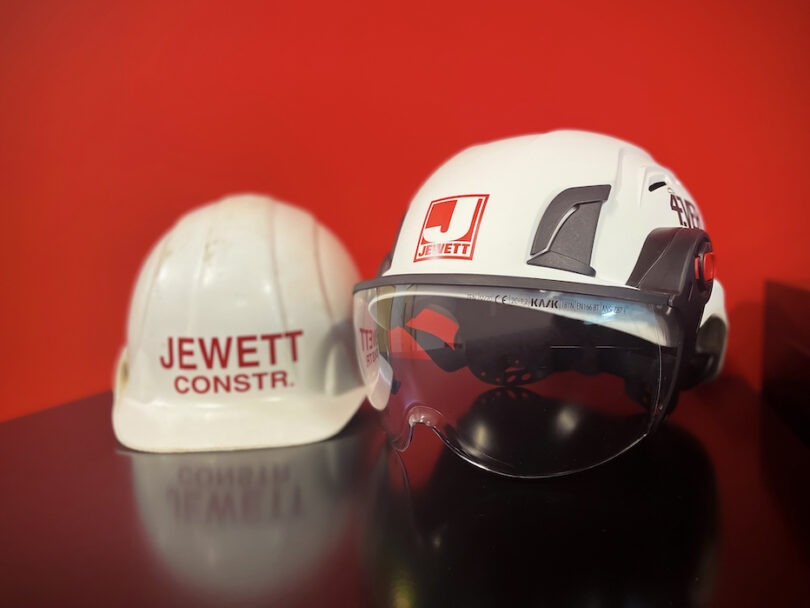 When Ed Jewett started a home building business in 1972 with support from his wife, Arlene, he never imagined that it would one day grow into a $100 million company with more than 65 employees working on projects around New England and beyond. “I had a pickup truck and my first desk was a dashboard,” he said as he recalled the humble beginnings of Fremont-based Jewett Construction.

In those early days, he remembers hunting for jobs and scraping by as he tried to launch the business. “In 12 months I think I did around $60,000 worth of work. It was a struggle. It was just me, the pickup truck and that dashboard full of paperwork, but little by little we inched forward and got better.” 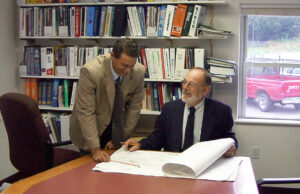 This year, Jewett Construction is celebrating its 50th anniversary, and the achievements of a family-owned construction management company built from the ground up that now specializes in commercial construction projects in the office, manufacturing, retail and automotive sectors.

Ed’s son, Craig Jewett, who took ownership of the business in 2003 and has served as president since then, attributes much of the company’s success to good old-fashioned grit, strong work ethic, sound procedures with checks and balances, and a commitment to investing in and empowering employees.

After his dad hired him as a laborer in the early 1990s following his college graduation, Craig worked his way up in the company. “Nothing in my direct family has been handed to anybody. I had to pay my parents for this company. I think that helps you get out of bed in the morning,” he said.

While this year marks Jewett Construction’s 50th year in business, it’s not the only big milestone. The company is also seeing a change in leadership as Craig steps away from his role as long-time president and hands the reins over to Greg Stewart, a former senior vice president who was hired as a senior estimator in 2015. Stewart’s promotion to the top position is a move that’s a first for the company as he’s the only person outside the Jewett family to hold the title of president. It’s big shoes to fill, but Stewart is up for the challenge. 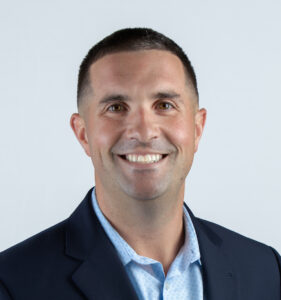 “I don’t see it as pressure. I see it as my responsibility to our team members and ownership to provide a return on the investment the company made in me seven years ago. I’m just one example of what is available to all of our team members; everyone within Jewett Construction has the opportunity to grow personally and professionally on parallel paths with the company’s strategic growth. We want to hire people that are smarter than us and can show us new things that we can incorporate into that special sauce that makes us Jewett. This is the future and I’m incredibly excited,” said Stewart, who gained experience while rising through the ranks of a Massachusetts-based contractor for many years before joining Jewett.

The Jewett family is confident that Stewart will be a strong leader as the company grows in its strategic markets and continues to support its workers, promoting from within and creating individual professional development plans for team members with a continued commitment to invest in technology and a path forward. “I’m excited about the future and having an opportunity to sit back from 30,000 feet and watch all of our people grow,” Craig said.

That’s exactly what his father has done as he’s witnessed the company grow into a top design-build construction firm in New England with his son at the helm. “You would have to be mindless if you weren’t immensely proud of the success and the growth of the company. I’m very, very impressed with Craig’s achievements,” Ed said.

As the company’s portfolio has expanded over the years, Craig pointed to two of its commercial projects during the 1990s that helped to put the business on the map: Tyco’s corporate hangar at Portsmouth International Airport and the National Passport Center, also in Portsmouth, N.H. “That catapulted us forward and people started paying a little more attention to us when the 2000s hit,” he said.

For Craig, carrying on his father’s legacy has been rewarding, but also challenging in a pleasant way. “As the company grew I had to learn to adapt. I had to back away and empower people to do their jobs and stay out of the way,” he said. “One reason why we’ve been successful with associates is because we work closely with them to advance their skills through our internship programs that have been built by the company. We’ve got a strong group here that’s dedicated to the cause, follows the plan and understands that it can get a little bumpy from time to time, but that’s helped us as well.”

Powering Through the Pandemic

The recent COVID-19 pandemic presented countless challenges for many businesses, but Craig said he and his team viewed it as a time for new opportunities. The company had no layoffs, picked up some of its biggest clients, and hired its first human resources director. “A lot of people looked at it as the end, but we looked at it as the beginning. Instead of laying people off, we knew we had to buckle down and make sure our people were protected and bring somebody in who could help us bring more people in,” he said. Jewett Construction also hired several new workers who lost their jobs with other employers during the pandemic.

While there were only five employees working in the office a decade ago, the company now has 65 employees and found success in hiring while other employers continue to face challenges finding new talent in the current workforce. “I think great companies take advantage of the benefit of their associates to grow during those periods, and if and when things slow down in our area, we’ll look at that as an opportunity to grow again and not curl back and hide,” Craig said.

One of Jewett Construction’s biggest accomplishments during the pandemic was the creation of its new office space at 25 Spaulding Road in Fremont, N.H. after outgrowing its offices in Raymond, N.H. Jewett purchased the commercial building at the site of the former Spaulding & Frost Cooperage and began a major renovation. Six tenants occupy the first floor while Jewett’s new home is located on the second floor.

Relocating to the Fremont site seemed fitting, especially since Ed was a former co-owner of the historic cooperage before it burned in 1973; the factory known worldwide for its wooden barrel production was later rebuilt, but closed in 1999. Ed said he was excited when he learned that Jewett Construction was moving to the old barrel factory property. “I always had a bit of an affection for Spaulding & Frost and the Fremont area. It seemed to make sense to me and I’m happy about it,” he said.

All In The Family

Jewett Construction has worked to foster a family atmosphere that includes Craig’s son, Nick, an estimator who has grown up with the company. He recalled how his father used to bring him to work when he was younger and how he referred to employees like TC Holt, a superintendent, as Uncle T.

“We still have that family dynamic, it’s just that the family is a little bigger now,” said Nick, who began working full time as a laborer with the company six year ago after finishing college. His days spent tagging along with his dad and employees during school vacations, snow days and other times led him toward a career with the family business. “That’s why I’m here now. I just loved the atmosphere.”

Holt, who’s worked with the company for 16 years, still remembers spending time with Nick when he was a kid. “We always took him under our wing,” he said. Holt said he’s always viewed the Jewetts as family and is glad that he’s been a part of the company’s success. “For me, to see a company go from where we started to where we’re at now and the caliber that we’re operating at, it’s just awesome. When they gave me the task of remodeling the office I thought I got the short straw, but then I realized I was starting a new legacy here. It’s another chapter and it’s really cool that I had a chance to be part of that.”

Rob Bernier, who works as a superintendent supervising field activities, has worked for Jewett for seven years. He recalled that when he was first hired, he had a vacation planned in two weeks, but as soon as he returned his grandchild was born, prompting him to take another week off. “That’s really what sold me on the family idea. Right off the bat they were so joyous with me having a grandchild. Everything else was second to them. They were good with me taking the additional time off after only being back for one day and working for the company for less than a month,” he said while taking a break from work on a 45,000sf manufacturing plant in Chelmsford, Mass.

Bernier added, “It’s been a wonderful working experience for me. The biggest thing for us is, we turn difficult problems into creative solutions. That’s really what we strive to do every day.”

Eye On The Future 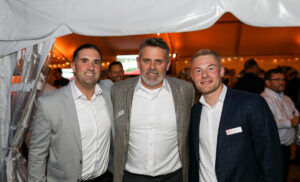 As the company looks ahead, Stewart said the future may include an expansion beyond New England to meet their clients’ needs. “We’re looking at some geographic regions that our clients are asking us to go to. We’re not targeting an area. We’re targeting our clients who, because of our performance, are asking us to go to places like Georgia and Virginia. Our growth is really based on repeat-referral and the relationships we build with our clients; those relationships and our project performance are the reasons our clients are asking us to travel to new locations and bringing us with them. Geographically we will be growing, but not for the purpose of geographic growth, but for the purpose of supporting our clients,” he said.

Craig said he believes that its people and a commitment to providing a tailored experience will continue to set Jewett Construction apart from its competitors. “It’s not one size fits all and we accommodate that. We adapt to our clients’ needs. We don’t have them adapt to us. We follow through on our commitments during the pre-construction phase, during construction, and then warrantying our client’s building long after our warranties run out. We’re there for the clients years after.”

With Stewart at the helm, Jewett Construction is well positioned to carry its tradition of shared success forward, working to ensure that its clients, subcontractors and employees continue to thrive. It’s a legacy that’s been 50 years in the making and one that Stewart is committed to preserving for years to come.