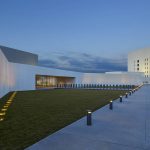 The chiller plants for the adjacent Kennedy Library were relocated to the new institute facility during construction. Within its scope, J.M. Electrical repositioned the chiller plant controls for the Kennedy Library and integrated them into the same backbone as the institute’s chiller control system, and then put the system back online. This entailed bringing an elaborate system of pumps, valves, actuators, and frequency drives under control and integrating them so that they function as one system. To accomplish ongoing HVAC service at the Kennedy Library, a parallel system of temporary chillers was utilized so that humidity and temperature control in the critical museum environment was always maintained.

Climate control, also vital to the new Edward M. Kennedy Institute’s museum environment, is fully computer-controlled to assure an optimal environment. The building automation system constantly monitors all spaces within the facility and adjusts based on real-time conditions. It is programmed to alert management as to any adjustments that may be required with control of the building’s automation system operable via the facility’s engineering office.