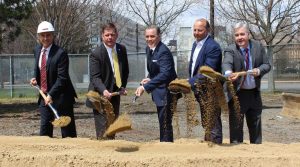 Boston – Intercontinental Real Estate Corporation and Harbinger Development recently broke ground on the Hampton Inn by Hilton and Homewood Suites by Hilton Boston Seaport. The $176 million, dual-branded hotel is being built at 660 Summer Street in the Seaport District of Boston, within the Raymond L. Flynn Marine Park adjacent to the Design Center and the Cruise Port Terminal.

Architects for the project are Perkins & Will and Group One. Consultants include TR Engel, Bohler, McNamara Salvia, and Lightship. Intercontinental and Harbinger entered into a long-term land lease with the Boston Economic Development Industrial Commission last year.