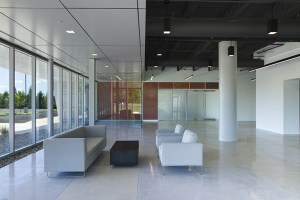 Originally constructed in the 1960s and early 1970s, the buildings located within the new Riverview Technology Park will offer tenants 100,000 – 500,000 square feet of facilities for creative offices, research and development, and light manufacturing. Integrated Builders’ work on the project is aiding in the transformation the buildings to create a modern space that suits the needs of growing companies. Within the past year, the Integrated Builders team has built a 400-car parking lot and a new lobby entrance and façade for the 495 Woburn Street building. The second phase of construction will include interior demolition, addition of 90 new windows and saw-tooth skylights, electrical upgrades, and a new façade.  Moving forward, improvements will continue once the building begins to lease.

Integrated Builders was selected as general contractor for this project due to the firm’s extensive background in developing spaces for office, manufacturing, and biotech clients. William Manley, Founder and CEO of Calare Properties, expressed his confidence in the abilities of theIntegrated Builders team.

“We are proud that we’ve been able to collaborate with Calare Properties and Hackman Capital on such top-tier projects,” commented Jay Dacey, President of Integrated Builders. “Most recently, our work together at 112 Barnum Road in Devens led to the project receiving the Boston Business Journal’s Deal of the Year Award, and Riverview Tech Park is on target to be as equally an impressive project.”