NEW HAVEN, CT. – Svigals + Partners has announced the expansion of its acclaimed KidsBuild!™ program, a community outreach process that educates school children about the design, construction, and maintenance of their own school buildings. Conceived in 1995 to support the rebuilding and expansion of the Edgewood Magnet School, KidsBuild! emerged from a broad-based template for community-based school planning and design developed for the first school in the $2 billion New Haven School Construction Program.
More recently, Svigals+Partners conducted a KidsBuild! program as part of the design and construction of the Engineering & Science University Magnet School (ESUMS), which opened last February. Beginning in 2018, the firm plans to present the KidsBuild! formula and success stories to public, independent, and charter school leaders around the United States.
According to Svigals + Partners, the ideas behind KidsBuild! emerged more than two decades ago in the creation of the first-ever School-Based Building Advisory Committee. “These SBBACs gave birth to schools rooted in their neighborhoods and the particular needs of their communities,” says Julia McFadden, AIA, an architect and associate principal with Svigals + Partners. “The Edgewood School project experience created a process template that shaped a nearly $2 billion school construction program, and we saw an opportunity in this to expand the involvement of the students themselves.”
KidsBuild! has been introduced in eight Connecticut public schools, including Columbus Family Academy in New Haven, the Discovery Magnet School in Bridgeport, Jonathan E. Reed School in Waterbury, and the new Sandy Hook School in Newtown, Conn., all designed by Svigals + Partners. “KidsBuild! is an innovative way to introduce city students to meaningful careers in architecture and construction and also to teach them to be proud of their schools,” said former New Haven Mayor John DeStefano, Jr. “Kudos to Svigals + Partners for their involvement.” 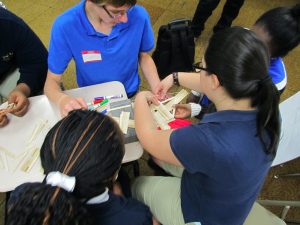 The latest KidsBuild! program, created for ESUMS, a “maker school” for grades 6-12 located on a university campus site in West Haven, Conn., comprised nine workshops over four years engaging about 35 students from various grades each year, says Svigals + Partners project architect Katelyn Chapin, AIA.
“We worked with two ESUMS teachers and the principal, Medria Blue-Ellis, who championed this successful program,” says Chapin. “The workshops included teaching about the architectural design process and specific topics — like cantilevers and sustainability, devising ways to integrate art into the new building, and imagining how adjacent wetlands could affect the engineering and construction process.” Other workshop sessions introduced careers in architecture and engineering with site visits led by design team members to enable students to track the construction process. The experience introduced students to concepts of surveying, groundwater flow, structural engineering, and construction sequences.
“The students and adults alike really appreciated these opportunities created through KidsBuild!,” said Hunter Smith, an ESUMS teacher of math, engineering, and science. “We were able to follow along with the project team’s work and get exposed to the deep pools of knowledge that each company and each individual brings to the project.”
KidsBuild! is a program initially developed by Svigals + Partners with the New Haven School Construction Program to educate school children about design, construction, and maintenance of their new schools through creative engagement with fellow students and the design team.

Thus far, the KidsBuild! program has been realized at eight public schools in Connecticut: the Edgewood Magnet School, the John S Martinez School, L.W. Beecher School, and Columbus Family Academy (all in New Haven); the Discovery Magnet School in Bridgeport; the Jonathan E. Reed School in Waterbury; the Sandy Hook School in Newtown; and the Engineering & Science University Magnet School (ESUMS) in West Haven. The firm has discussed the program across the United States in professional forums and publications, and they hope to expand its use nationally.

After a visit to the architecture firm offices of Svigals + Partners, one eleventh-grade student said, “After my visit to Svigals + Partners I was able to understand the amount of work that goes into building our new school. I am more aware of what the future of ESUMS is going to look like and it makes me proud to be part of the process.” Several students in KidsBuild! said they were motivated to look into architecture or construction as possible careers.
“The students and adults alike really appreciated these opportunities created through KidsBuild!,” said Hunter Smith, an ESUMS teacher of math, engineering, and science. “We were able to follow along with the project team’s work and get exposed to the deep pools of knowledge that each company and each individual brings to the project.”