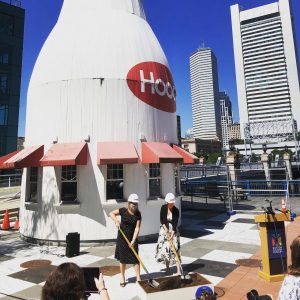 The project was awarded to the Marion-based company in July and will begin in early August.

South Coast Improvement will give the facility a much needed facelift to better withstand the conditions in Fort Point Channel, in addition to a complete renovation of the interior.

“The Hood Milk Bottle is one of Boston’s Top 10 landmarks and is an actual historic landmark to boot. That calls for a renovation that utilizes historical products,” said Tom Quinlan, president of South Coast Improvement Company.

The architect for the project is Wessling Architects of Quincy. The project includes stripping the exterior down to the frame and installing new insulation, sheathing, siding, windows and doors. The interior will receive new plumbing, HVAC, and electrical, as well as a makeover so the facility can once again serve ice cream.

Funds for the project were donated by Hood’s owners as a gift to the Children’s Museum. A completion date is set for early fall.