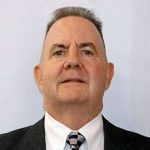 In Dumas, Local 103 will be getting a seasoned and experienced leader with no need for on-the-job training. He is a 37-year member of Local 103 and has served the past 18 years as the union’s president.

Dumas served the union in a number of leadership roles, including business agent, member of the union’s executive board, and trustee of the health, annuity, pension, LMCT, and JATC funds. He also has served as a member of numerous contract negotiation teams, playing a pivotal role in several major contracts governing members’ benefits.

He earned a Bachelor of Arts Degree from UMass Boston in the studies of labor and law, and is a 1995 graduate of Harvard University’s Trade Union Program.

A long-time presence in Massachusetts labor circles, Dumas was honored in 2012 as winner of the Cushing Gavin Award, recognizing outstanding leadership on behalf of working families.

Throughout his career he has shown a keen interest in nurturing younger union officers in preparation for leadership roles in the future, and his leadership style has always been one of inclusion and accessibility to all members. In his role as business manager, he will be responsible for all of the day-to-day operations of the union as well as for designing and implementing all short- and long-term strategies and procedures on behalf of Local 103 members.

In accepting this new challenge, Dumas took time to acknowledge the work of Monahan, his predecessor. “As our business manager, Mike Monahan brought a vision and long-term plan that focused intently on gaining market share and creating more jobs for our members,” Dumas said.  “He was a constant presence throughout the industry, and he was never bashful about speaking up for our members or fighting any fight that would gain jobs or better position the union.”

For his part, Dumas also foreshadowed his goals as business manager.

“….I want to continue the progress that has been made and sustain the long term vision set forth by Rich Gambino and Mike Monahan before me,” he said .  “While economic times have improved since the terrible recession of 2008, I know and I understand that there are plenty of our own members still feeling the pain and still fighting to provide for themselves and their families.  You can be sure that these members, and all members, will be on my mind every day that I have the privilege of serving my union.”

“While my top priorities as business manager will be to increase job opportunities for our members and continue to improve our market share, I will also challenge all members of Local 103 to become more involved.  For over 100 years it has been the members who have built this union and it is the members who will sustain this union far into the future.  As we work together to forge better paths for our union, it is important that more members get involved in the political process that affects our lives on a daily basis.  It is critical that more members join charitable efforts within their own community and attend public hearings on important issues and projects.  We as leaders can and will continue to offer direction and paths forward, but it is the membership of Local 103 that ultimately drives where we go together,” Dumas said.

“Throughout my time in Local 103, from apprentice to journeyman, from executive board member to trustee, negotiator to president, I have always relied on an old edict driven home to me at an early age by my parents, and that is to ‘treat everyone you come in contact with as you would wish to be treated.’  That will continue to be the driving principle in my relationship with my fellow members, along with my sincere and honest pledge that my door will always remain open to any thoughts, ideas, problems or concerns of any and all of my brothers and sisters.”