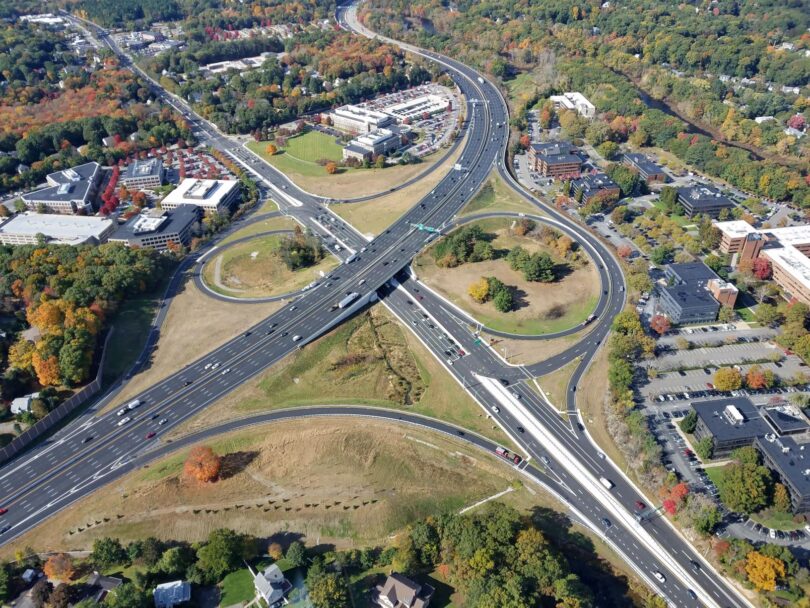 Needham, MA – The American Council of Engineering Companies of Massachusetts (ACEC/MA) has named Jacobs as a finalist of its 2020 Engineering Excellence Award for their work on the roadway and bridge improvements along a 3.5 mile long section of I-95 in Needham and Wellesley Massachusetts.

The project was the last phase of a 20-year effort by the Massachusetts Department of Transportation (MassDOT) to widen the I-95 (Route 128) corridor to four travel lanes and a full shoulder in each direction. The project provided an increase in the capacity of the mainline, primarily through improved merge and diverge operations. The elimination of travel on the shoulder provides a smoother traffic flow and safer environment by returning the shoulder/breakdown lane to its intended purpose during the eight hours it was previously used as a travel lane and by providing adequate merge and diverge areas.

As of project completion, I-95 (Route 128) now has a consistent cross section of eight lanes from Canton to Peabody. Additional roadway improvements included widened shoulders at the median, a new interchange at Kendrick Street, new collector/distributor roads between Kendrick Street and Highland Avenue, auxiliary lanes in each direction between Highland Avenue and Route 9, and a reconfiguration of the Route 9 interchange.

The project required construction of three replacement bridges and one new bridge, widening of a historic bridge, and demolition of an abandoned railroad bridge. Over 11,000 feet of retaining walls were built in 18 locations throughout the project area. In addition, over 10,000 feet of noise barriers were constructed in seven locations.