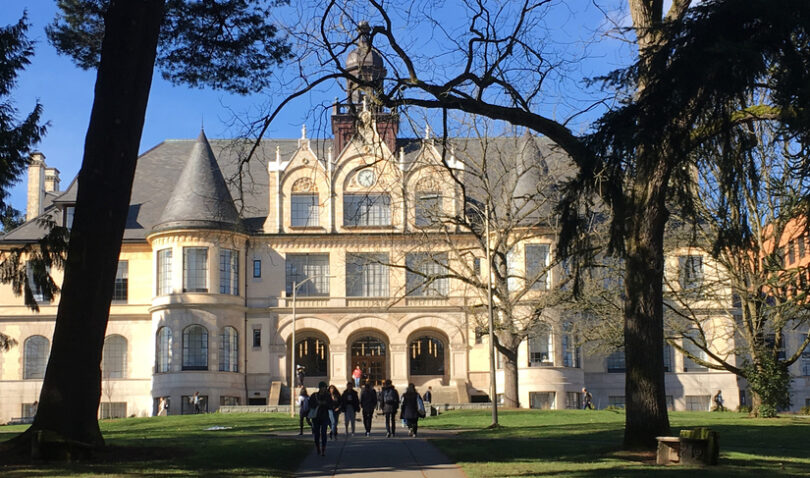 What the Pandemic has Taught Us about the Flexible Workplace

Occupancy restrictions are being lifted across the country, and companies and institutions are anxious to get back to business. But it’s clear that for many, the workplace will never look the same. After a year-and-a-half of maintaining only a virtual presence in the office, classroom, and to some extent even the lab, employees want to retain some of the autonomy and flexibility they discovered while working remotely. And employers, who have learned that much of the corporate and academic mission can be fulfilled from anywhere without sacrificing productivity, want to make better use of their space. One likely scenario going forward is a hybrid workplace: a combination of remote and in-person activity. In a recent Tradeline survey of 155 individuals at 115 organizations nationwide, 76% of the respondents named hybrid workplaces as their top space planning and management priority. 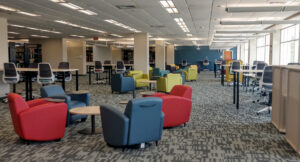 UNC Charlotte converted 50,000sf of stacks on two floors of the library to study space, a project that was spurred to completion by the need to socially distance during the pandemic. / Photo courtesy of UNC Charlotte

“A substantial majority of our employees would want to have some version of a hybrid model,” says Stephen Majeski, senior associate dean for Research and Infrastructure, College of Arts and Sciences at the University of Washington. “We want people back. It creates connectivity, interaction, spontaneity, water cooler talk, creativity. A lot of staff and faculty miss that, but we also recognize that we don’t always need to be there. We can still work effectively in this hybrid mode.”

Bill Fedun, director of Workplace Solutions at CUNA Mutual, is hearing the same thing at his company. “I think that’s what employees are going to expect, and if they don’t get that from us, they’ll find someone else who lets them have that flexibility,” he says. “From a talent-retention point of view, it’s important to give people that option.”

Kathryn Horne, director of planning, design, and construction at the University of North Carolina at Charlotte, says, “The university is preparing for being fully back on campus this fall and we were back as of July 6. There are all these people saying, ‘I want to do something hybrid.’” A university task force is exploring the issues around remote work. “Now that they’ve had the opportunity to experience the flexibility of remote work, a lot of people want to continue it.”

The question is, how do you manage that flexibility from an operational standpoint, and how do you capitalize on all that extra space?

Before the pandemic, almost no one at the University of Washington worked remotely, says Majeski. It was permitted only under specific circumstances, with teleworking agreements that had to be vetted by human resources.

That policy will be relaxed going forward, with employees no longer having to justify teleworking, though working 100% remotely will still be the rare exception. “We expect the vast majority of professional and classified staff will be full time on campus or a version of a hybrid model,” he says. “We are just beginning the process of implementing this, where departments will process requests from professional and classified staff saying they want to work ‘x’ number of days at home.

“The tricky part, because we do have to be front-facing, is that they can’t all work remotely on Mondays and Fridays. We will need to develop a matrix of days and hours, so it’s balanced and there’s always a presence, which will be difficult with the smaller departments that have only one or two professional staff.”

Remote work is not an entirely new concept for CUNA Mutual. Pre-pandemic, about 10% of the workforce was fully remote. “The previous thinking was that if you were within a reasonable drive to one of our offices, you were more or less expected to be in the office as a general rule,” says Fedun. The company made exceptions “so we didn’t limit where we were looking for talent.”

This month, CUNA Mutual reopened in person to anyone who wanted to return. “Based on the numbers we’re seeing, there’s not a huge difference from the 10% who will be 100% remote,” he says. “But a lot of the remaining 90% want to be in the hybrid model, even if it’s just working in the office one day a week.”

Many institutions, particularly ones that own most of their facilities, are not in a position to shed the space freed up by remote workers, but are instead considering ways to repurpose it.

“UNC Charlotte is very space-constrained,” says Horne. “We’ve had tremendous growth over the past 10 years, and construction has not kept up with the need, for offices, labs – everything. This could be an interesting way to find space we can repurpose for other uses.” 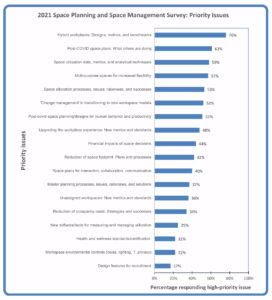 An example was converting 50,000sf of stacks on two floors of the library to study space, a project that was long considered but spurred to completion by the need to socially distance during the pandemic.

The complicated part of a hybrid workplace, says Horne, is at what point does an employee no longer have access to a dedicated workstation? When they work in person three days a week? Two? “Someone in our finance group might need to be on campus only one day a week,” she says. “You might have people only one day a month, and then what do they need?”

Unassigned seating is something CUNA Mutual is exploring for the first time, too. The company has historically had 100% assigned dedicated space, but is now working on piloting a hybrid space where no one owns a desk. “Culturally, that will be a huge shift for us, but I think it’s the right move,” says Fedun.

The pilot will consist of 50 to 60 collocated hoteling/hot-desking spaces where employees will touch down with their laptops several days a week. “We hope to learn if people will use it if it’s in a centralized location, or if they prefer that it be in neighborhoods across campus, so they can be closer to their team,” he says.

A 2018 study showed that individual workstations at CUNA Mutual are occupied only about a quarter of the time, and private offices even less, says Fedun. “We were trying to use that data to get people to think about how to work differently, and then the pandemic forced everyone to work differently.”

The company is looking at the pilot as a kind of follow-up utilization study to see how much time people will actually spend at their hybrid workstation.

Fedun predicts that underutilized office space will be converted to a combination of open and enclosed collaboration space, which the company has historically lacked. “When people do come to the office, they’re going to want to collaborate with their colleagues,” he says.

UNC Charlotte is also trying to get a handle on the actual occupancy of its administrative space. “I’d like to consider a pilot project using occupancy sensors for administrative space,” says Horne. “We need more space, and there may be an opportunity to repurpose office space for other uses. Our enrollment increased during the pandemic; nobody was expecting that.”

At the University of Washington, any significant changes in space allocation as a result of remote work are farther down the road, predicts Majeski. Most of the buildings in Arts and Sciences are old and full of small private offices which could not be converted to open shared workspaces without a gut remodel, something that is not on the books yet.

“We’ve been talking for a long time about open offices and shared workspaces – having fewer seats than people,” he says. “It would not be possible with our physical structure; there are walls. But with new buildings or gut remodeling, we can ask, ‘How much space do you really need?’ You could do some cool things with the space you freed up.”

For example, Denny Hall, the oldest building on the University of Washington Campus, underwent a $53 million gut renovation in 2018. The project included the reconstruction of a central stairway that connects all five floors, and creation of open spaces at the main entrance of the building for students to study and collaborate while waiting for classes. A large active learning classroom and shared anthropology research and teaching labs were added.

There is no doubt that the pandemic has changed the way people view their workplace, from how they interact with their colleagues to where they physically conduct their work.

“Shutting down quickly was hard,” says Majeski. “Going back to work is almost as complicated.”