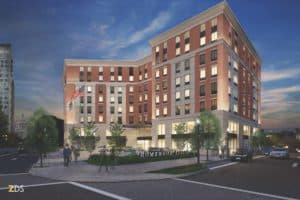 The six-story, 120-room extended stay hotel is located at the once-vacant lot at the intersection of Exchange Street and Memorial Boulevard.

Tocci Building Corporation of Woburn, Mass., is the project’s construction manager, and ZDS of Providence is the architect. Many of the design elements, including the building façade, were approved by the Capital Center Commission and designed to complement the historic buildings surrounding Kennedy Plaza and the future transportation hub, all of which are within walking distance of the property. 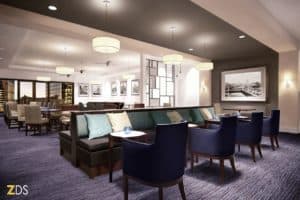 The hotel will have an onsite parking garage with lifts, so that each space can accommodate two vehicles, maximizing space; a meeting room for up to 100 people; an extensive fitness center; a dining room with complimentary breakfast; and 120 suites, all with fully applianced kitchens.

Working together, First Bristol and Paolino were able to purchase property acquired from the Providence Redevelopment Agency.

The property, vacant for 15 years, was necessary to make the project viable. The hotel is expected to be completed in early 2019 and is anticipated to generate more than $900,000 annually in property and hotel sales and room tax revenues.

—
“For years, developers have tried to build on this site, which was once part of the Providence River,” said Joe Paolino, managing partner, Paolino Properties. “Working with Jim Karam and his team at First Bristol, we were able to creatively solve issues that other parties faced to make the project viable.”

Chief among the obstacles was an unstable base due to geotechnical issues and large pieces of old concrete and granite, which created soils susceptible to differential settling. The developers preloaded the site to mimic the constructed building, and created compaction to minimize future settling after construction. Further, they used rapid RAM compaction, which sends vibrations to close air pockets in soil below grade to further reduce settlement.

First Bristol and Paolino Properties also garnered support from the Rhode Island Commerce Corporation, securing a 15-year Tax Incremental Financing agreement. It also received a 10-year tax stabilization agreement from the city of Providence, both of which were necessary to make the project possible.