Ribbon cutting for The Residences at Wells School

Southbridge, MA – Arch Communities and WinnCompanies recently celebrated the completion of a $25.7 million adaptive reuse project to transform a 106-year-old historic school building in Southbridge into apartments for seniors ages 55 and older.

Congressman Richard Neal, Massachusetts Lt. Gov. Karyn Polito and numerous state and local officials joined Arch Communities principal, Richard Relich, and WinnDevelopment president and managing partner, Larry Curtis, to cut the ribbon for The Residences at Wells School. Of the 62 apartments, 56 provide affordable housing at rents set at 60% of Area Median Income (AMI), including eight apartments reserved for residents at or below 30% of the AMI.  Six apartments have been customized for handicapped and sensory-impaired households. 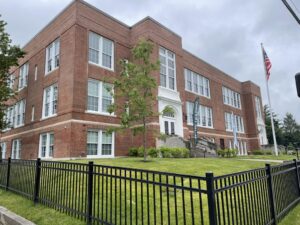 The Residences at Wells School

The three-story, 90,000sf building served as a school for a century but had been vacant for eight years before construction began in 2020. It was built in 1916 as Southbridge’s first public high school and was converted to a junior high school in the 1960s. The building was nominated for the National Historic Register in March 2017. Adaptive reuse techniques preserved the historic features of the building, which was designed by Peabody and Stearns.

Amenities at the new apartment community include an internal courtyard, resident lounge, craft room, media screening, fitness and yoga center, library, an Amazon package locker, on-site storage units and an on-site management office. The project has been designed to achieve the Enterprise Green Communities certification, a U.S. standard for the design, construction, and operation of healthy, energy efficient and environmentally responsible affordable housing. 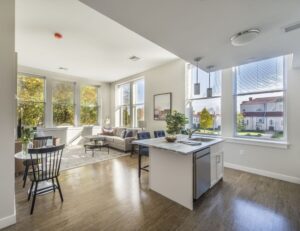 WinnResidential, the property management arm of WinnCompanies, operates the property. Tri-Valley Elder Services provides supportive services programming for residents. Keith Construction served as the general contractor for the project and The Architectural Team served as the architect. 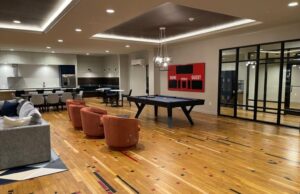 “As a developer, there’s nothing more fulfilling than restoring a historic landmark and returning it to service for a good case,” said WinnDevelopment executive vice president, Adam Stein. “Everywhere we work, we find situations where seniors cannot afford to stay in their community. This effort is a small step toward addressing a much larger need.”