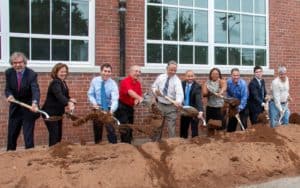 The four-story academic core of the building, which has been vacant for a decade, will be gutted to create 20 apartments of market-rate housing, eight apartments for residents earning 80% of Area Median Income (AMI), and 28 apartments at 50% of AMI. An additional 14 units will be available at 25% of AMI and targeted to help those who are housing insecure. 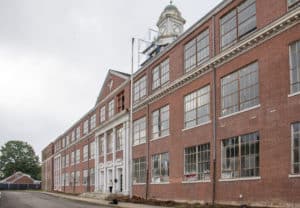 The former high school building will be converted into 70 apartments.

The final unit mix will feature 67 one-bedroom units and three two-bedroom units. A 1973 addition to the building will be demolished to allow for the creation of 55 of the 86 planned parking spaces.

WinnDevelopment will offer services to eligible residents in addressing housing insecurities along with health and wellness initiatives.

The Architectural Team of Chelsea is the architect on the project, and Keith Construction of Canton is the general contractor.

The conversion of the 104,871sf building, built in 1936, will include new windows; curtain walls and doors; exterior masonry re-pointing and repair; and numerous site improvements, including upgraded HVAC and utilities, paving, super-efficient exterior wall, slab, and roof insulation; a new elevator; native plantings; and EnergyStar qualified LED lighting and appliances.

The project will create ample amenity spaces for residents, as well as a property management office. Plans are to upgrade the pool and gym and to convert the auditorium section into new meeting rooms for town government, as well as performance space for community groups.

Construction is expected to be complete by June 2020. The new apartment community will be known as The Tyler.